based on the book of Alexander Dumas (the son)

The performance has one intermission

Opera performed in Italian with synchronized Kazakh and Russian subtitles

Symphony Orchestra, Chorus and Ballet of the Kazakh National Opera and Ballet Theatre after Abay 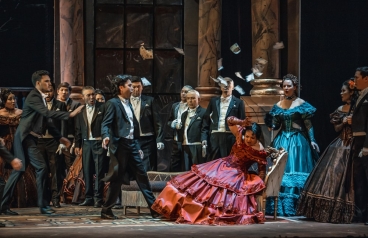 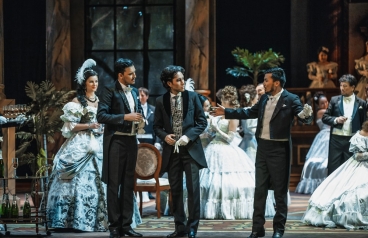 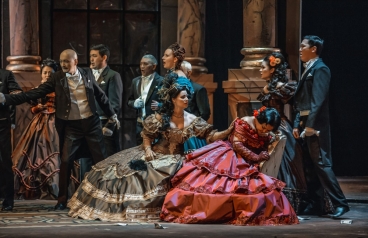 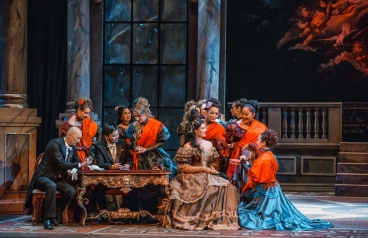 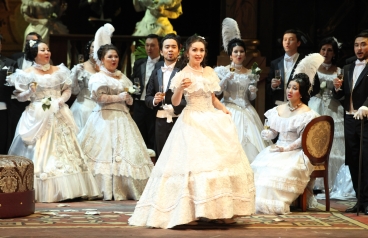 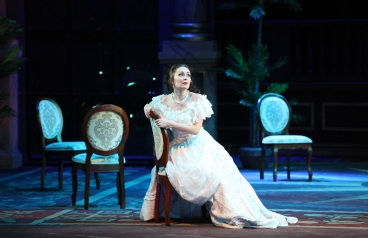 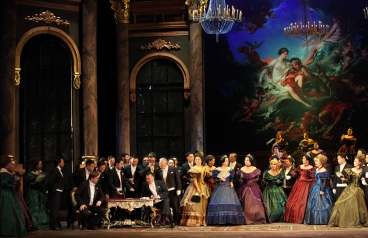 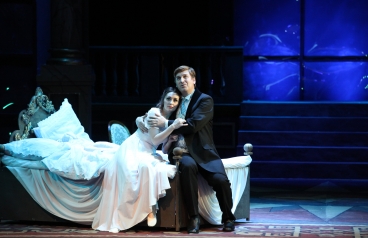 I action II action III action IV action
A lavish party at the salon of Violetta Valery’s, a courtesan. Among the guests is Alfredo Germont. He has loved Violetta with a pure and rapturous love since the first time he had laid eyes on her. The guests ask Alfredo to sing a song – a hymn to love and mirth. He passionately tries to persuade Violetta to change her way of living and to trust in his feelings. But Violetta dismisses Alfredo’s passionate declarations with jokes. She gives him a flower – a promise of a future date with him.
The guests leave. Violetta is alone. She excitedly mulls over Alfredo’s words. For the first time in her life, Violetta is confronted with genuine feelings. Her heart starts to fill with love.
Violetta and Alfredo have left Paris. The have found happiness in the peaceful countryside. Alfredo’s serenity is broken by the arrival of the maid, Annina, who accidentally lets out that Violetta has been secretly selling off her possessions. Amazed at the sacrifices of his beloved, he leaves for Paris to take care of the money matters.
Violetta is distractedly going through her letters. Her old friend Flora has sent an invitation for a masked ball. Violetta puts it aside with indifference.
Alfredo’s father, Giorgio Germont, appears. He accuses Violetta of leading her son to his demise and ruining their family’s reputation.
Violetta is in despair. Her love for Alfredo is her only joy in life. And she hasn’t got long to live. She is seriously ill. But relenting to Germont’ urgent pleas, Violetta decides to sacrifice her happiness. She writes a farewell letter to her beloved.
The letter plunges Alfredo into despair.
Germont enters. He invites his son back to his home in Provence. Suddenly, Alfredo notices the note from Flora on the table. He has no doubt now, that Violetta has left him forever. Drunk with jealousy, he hurries to Paris to avenge his betrayal.
Flora’s masked ball. The party is in full swing. Alfredo is at a card table with other gamblers. Violetta enters with Barone Douphol. Flora greets them ecstatically, but Violetta is a stranger to the colourful bustle. She is suffering her separation from her beloved.
Alfredo is seeking a quarrel with the Barone. Worried for Alfredo’s life, Violetta tries to prevent the duel. But humiliated by her betrayal, Alfredo convenes the guests and publicly insults Violetta, throwing the money at her face – a payment for her love.
Broken by her sorrows and her illness, Violetta is slowly fading away. Dottore Grenvil tries to give her hope, but Violetta knows that the end is near. She tells her maid to give her money away to the poor, and when left alone, reads Germont’s letter, announcing his son’s forthcoming return. Alfredo knows everything. His father has told him of his conversation with Violetta.
The lively cheering of a carnival can be heard from the street. An excited Annina rushes in. She informs of Alfredo’s return.
The lovers are happy beyond measure. They are dreaming of leaving Paris and starting a new life. Nothing can stand between them now. But Violetta has no longer the strength to live. Germont enters and remorsefully realises that his consent to his son’s marriage has come too late, Violetta cannot be saved. In her last fit of passion Violetta throws herself on Alfredo’s neck, and dies in his embrace.

The plot of the opera "La Traviata" was taken from the novel by Alexandre Dumas (the son) "A Lady with Camellias". The possibility of creating an opera on this literary work appeared at Giuseppe Verdi almost immediately after the publication of the novel in 1848. Verdi was at the premiere and finally established himself in his decision to write the opera. He found a theme close to himself at Dumas - the tragedy of the destiny of a woman’s ruined bourgeois society.

The theme of the opera caused a heated debate: the modern plot, costumes, hairstyles were very unusual for the public of the XIX century. But the most unexpected was that for the first time on the opera stage as the main character, portrayed with undisguised sympathy, the “fallen woman” came out (a circumstance specially emphasized by Verdi in the name of the opera, because the Italian word “grass” is translated exactly that way). Perhaps this novelty was the main reason for the scandalous failure of the premiere.

According to the genre of "La Traviata" - one of the first examples of lyrical and psychological opera. The routine and intimacy of the plot led Verdi to abandon the heroic monumentality, theatrical entertainment, and spectacularity that distinguished his first opera works. This is the composer's most “silent” chamber opera.

The performance was first shown on March 6, 1853 at the La Fenice Theater in Venice.The opera La Traviata appeared in the repertoire of the theater almost from the very beginning of its opening, but now the public is presented with an updated version, which was created in Abay KSABAT  in 2016.

“La Traviata” is an opera of a great style,” said Vyacheslav Okunev, production designer at the premiere, already invited to the eighth performance at the Abay KSABAT, - that's why everything in her - and the costumes, and the scenery, and the interior - is done in detail and as accurately as possible. We wanted to see this performance, the audience loved the opera with all my heart and tasted all its charm, because opera is a genre that can stop time, slow down its progress. In the opera, a person has a rest and gets an almost museum-like sensation: time stops for the evening, a huge orchestra plays especially for you, luxurious scenery changes and singers with brilliant vocal abilities change, and this is a very expensive sensation. ”