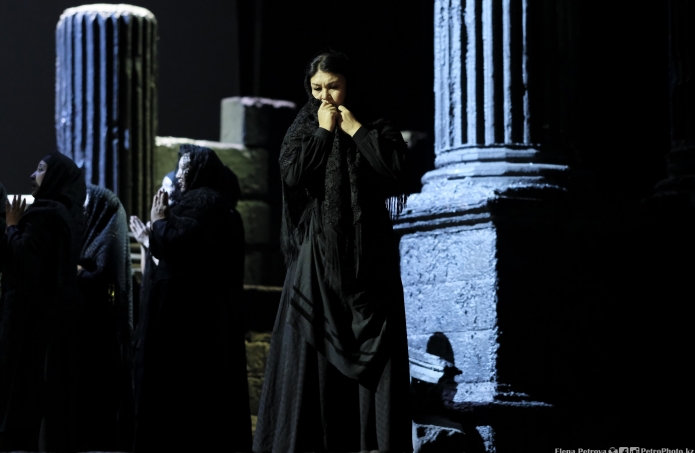 opera in one act

on the novel by Giovanni Verga 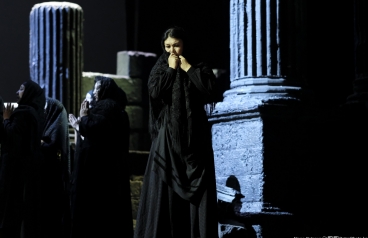 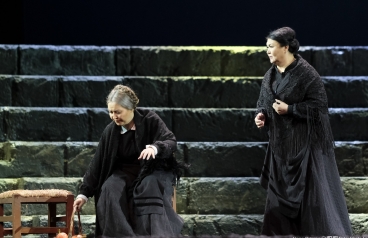 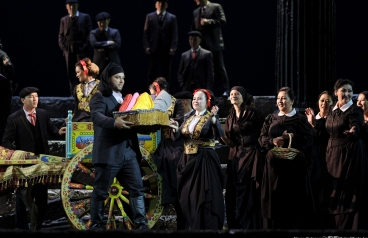 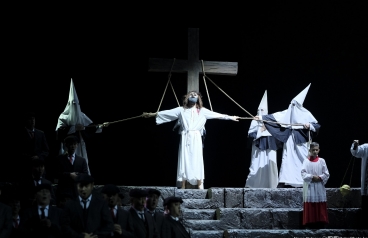 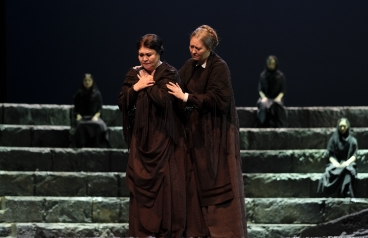 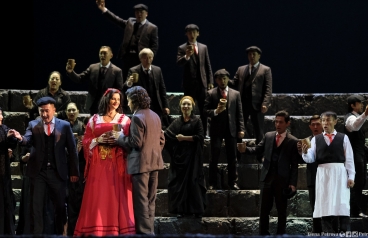 This story takes place in a Sicilian village at the end of the XIX century on Easter Sunday.You can hear the love serenade “Siciliana” performed by Turiddu. A soldier, who has recently returnedto his native village, sings a serenade to his beloved Lola.

A girlfriend of Turiddu - Santuzza, asks Lucia about her son - she doesn’t like the way he be-haves lately. The conversation of two women is interrupted by the arrival of Alfio, an energetic young

carrier, who is being met by peasants. He still doesn’t know that Turiddu spends time with his lovelywife Lola. A brief conversation with Lucia, in which he casually mentions that he saw her son near hishome, gives even more suspicion to Santuzza.From the church came the sounds of the organ. All the villagers bow down their knees,and together with Santuzza, they offer a prayer - “Regina coeli” (lat.) - “Queen of Heaven”. A religiousprocession enters the church, followed by the villagers. Santuzza, however, delays Lucia to tell herabout her sorrow. In the aria “Voi lo sapete, mamma ...” she talks about how Turiddu, before leavingthe army, promised to marry Lola, but when he returned, she was married to another, and then heconfessed his love to Santuzza, but now he was once again passionate for Lola. Lucia is very upset,she sympathizes to Santuzza, but cann’t help her in any way. Lucia enters the church.

Now that Turiddu himself appears, Santuzza speaks directly to him. He makes an uncon-vincing apology and becomes especially annoyed when they are interrupted by the one that caused

them to quarrel. Lola appears on the way to church; she sings a flirty graceful love song “Fior di giag-giolo” (“Flower, flower!”). When she leaves, the quarrel between Santuzza and Turiddu is played out

again with even greater force. Finally, for Turiddu, all this becomes unbearable. In a fit of irritation, hepushes Santuzza away, and she falls to the ground. Turiddu rushes after Lola to the church. Santuzzashouts after him the curse: “And te la mala Pasqua, spergiuro!” (“Die today in a bright holiday brightholiday!”)The last to go to church is Alfio. Santuzza also stops him and tells him about the infidelityof his wife.The wrath of Alfio is terrible. Santuzza, now full of remorse for what she did, she rushesafter him.The Easter service is over, and the peasants fill the street in front of the Turiddu’s housewith a noisy crowd. He invites everyone to drink with him and sings a feast song. Alfio enters. Turidduresponds with a bold gesture.Women lead Lola, Turiddu and Alfio face each other. Following the old Sicilian custom, thedishonored husband and rival embrace, and Turridu is bit by Alfio’s right ear - a sign of a challenge toa duel. Turiddu says he will wait for Alfio in the garden. He calls his mother, takes a promise from herthat she will take care of Santuzza.Full of gloomy forebodings, Turiddu is removed for the outskirts, where Alfio is alreadywaiting for him. Horrified, silent Santuzza. Time is tormenting. And here the terrible news interruptsthe oppressive silence: “Hanno ammazzato compare Turiddu!” (“Turiddu is killed!”)And again a terrible cry: “Hanno ammazzato compare Turiddu!”

In the end of 70s of the 19th century, a new creative direction appeared in Italy, whichdefended the position of merciless truthfulness and reflection of the reality of life, with all itscruel realities and unrealizable romantic illusions. For writers of Verist, the most faithful literarygenre was the novel, in the center of which is a person who is doomed to a joyless existence.The operas by Italian composers Pietro Mascagni “Cavalleria Rusticana” and RuggieroLeoncavallo “Pagliacci” became the most prominent representatives of musical verismo.Following the writers ’creative experience, the composers of the Verist also turned to the realdepiction of life.Both operas are written in a very concise one-part form.

The main attention of thecomposers was given to the personal dramas of their heroes, and moreover conveyed by “bright,screaming tones”: no subtexts, just facts.

The premiere of the one-act operas by P. Mascagni “Cavalleria Rusticana” and R. Leoncavallo “Pagliacci” on the stage of the Abay Kazakh State Academic Opera and BalletTheater took place in 2018.

A creative group from Italy was invited to stage the performances:the director was Lorenzo Mariani, the set designer, the costume designer - William Orlandi, thelighting designer - Roberto Venturi and the choreographer - Luciano Cannito. Musical directorwas the Honored worker of the Republic of Kazakhstan, Askar Buribaev.It is noteworthy that in the 70s of the twentieth century in the Abay KSATOB the opera by R. Leonkavallo “The Pagliacci” was performed by with legendary singers: Rosa Dzhamanova (Nedda), Vasily Yakovenko (Canio), Arthur Amonov (Tonio), Kurmanbek Murzabekov (Silvio). The conductor was the People’s Artist of Kazakhstan Bazargali Zhamanbayev.

The opera was written in 1890 in Rome. It also brought worldwide fame to its creator. TheItalian name of the opera “Cavalleria Rustic” in translation sounds cruel and ironic. After listeningto the opera, every viewer will see how dishonest is the behavior of almost all the characters.Pietro Mascagni himself, working with the original literary source of the writer Giovanni Verga, inthe opera’s musical material softened the characters.