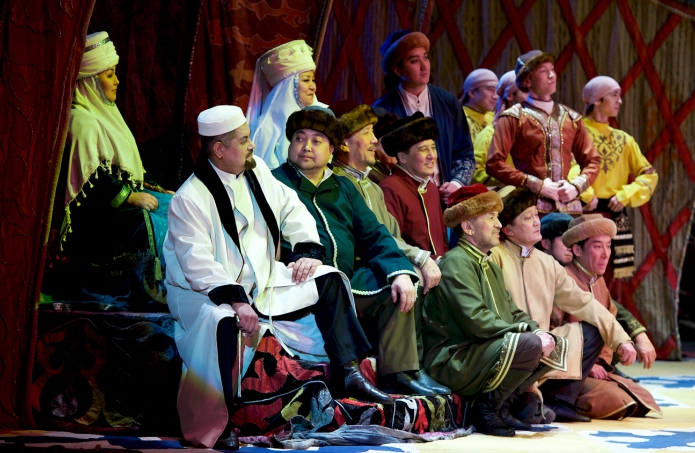 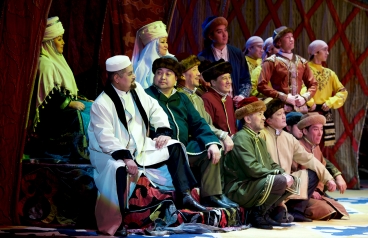 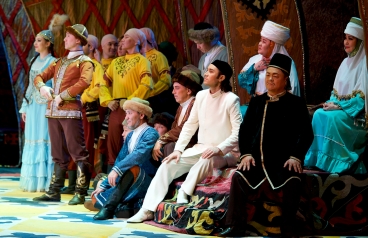 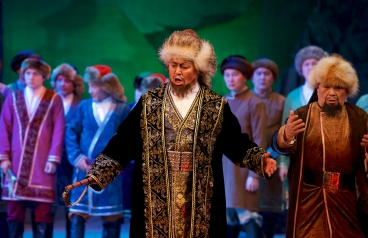 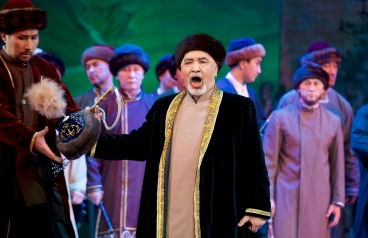 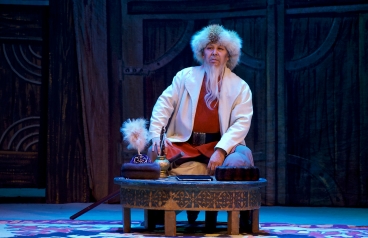 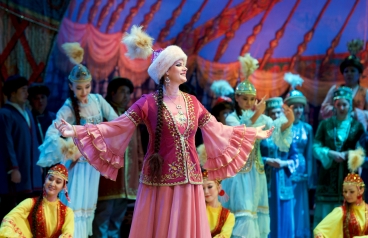 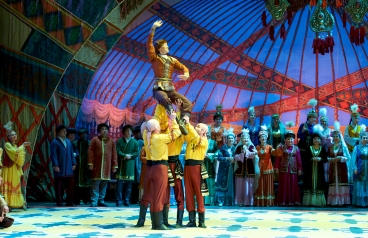 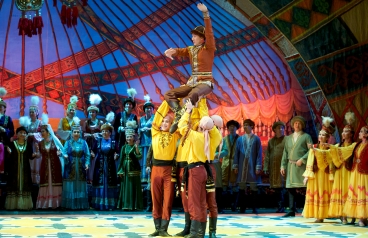 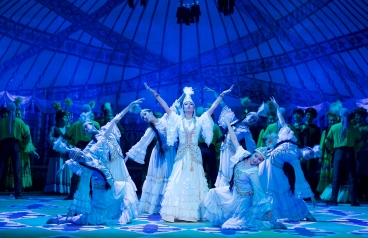 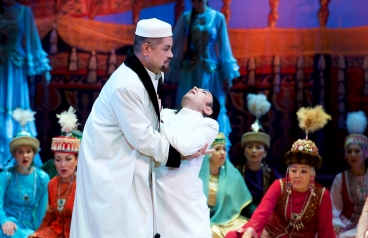 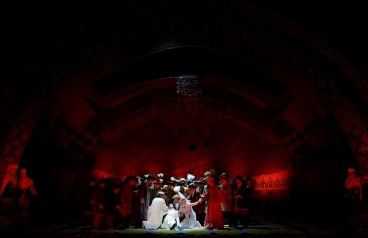 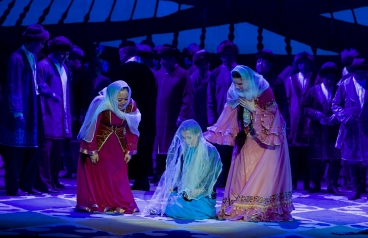 Steppe. The ruins of an ancient mazar. Here young Azhar and her beloved Aidar seek refuge. They are trying to hide from the chase. The sound of horses is heard. The fugitives are overtaken by Narymbet, brother of the late groom Azhar. According to ancient customs, Azhar should become the wife of Narymbet. He is accompanied by Biy Zhirenshe. Narymbet accuses Azhar of violating the laws of his ancestors and orders to capture Aydar.

«Weak hands are not difficult to tie, but you won’t be able to capture your heart and make Azhar fall in love» Aydar throws angrily. Azhar confirms his words. She vows to be faithful to him forever.

Girenshe ordered Aidar and Azhar to be bound. Headdresses are removed from them as a sign that they have been charged with heavy charges of violating centuries-old customs. Lovers say goodbye.

Zhirenshe orders to tie Aidar to the horse’s tail and jump. Aidar calls for help, and calls his teacher and intercessor - Abay.

«Say there is no pity for the apostate!» Narymbet repeats viciously, but at that moment when the rider is ready to move, Abay appears. His friends, the young poets Azim and Kokbay, are with him. Abay demands to cut the rope thrown around Aydar’s neck and untie Azhar’s hands. Let the judge of the family pass judgment. Abay demands justice. Confident that the court verdict will be in their favor, Zhirenshe and Narymbet release Aydar and Azhar. At the same time, Narymbet gloats, foreshadowing his victory and loss to lovers.

Abay's house in Semipalatinsk. Here Azhar and Aydar stopped waiting for the trial. Azim enters the house. Azim thoughtfully leads his monologue that Aidar is right in his desire to be with his beloved Azhar.

On the threshold of the house appears Girenshe. He asks Azim to persuade Azhar return to his village, and give Aidara to his hands. At the same time, Zhirenshe does not hide his hatred for Abay. Azim in dismay. Guirenche is leaving.

Abay, Aydar and Kokbay appear. In the hands of Abay is the manuscript of Aydar's new poem. Abay warmly approves his beloved student. The envious Azim is unhappy with the praises of Abay. Azim says that Aydar’s songs, which are so ardent, can increase the fury of enemies. But Aydar is sure that «the silent sadness is not peculiar to the poet». Abay warmly supports Aydar.

Syrtan enters. He is warmly welcomed by Abaу. Syrtan decided before the court to personally speak with Azhar. The elder asks to call Azhar to him. Girls bring Azhar. Syrtan calls to Azhar and asks who has led her astray? But Azhar swears that only ardent love makes her go against the customs of antiquity. With Aidar, she is ready to go to death.

Court scene. Its participants sit down. Together with Abaу, biys of both sides appear.

Syrtan declares the court open. He appeals to the people, asks to be wise, and to remember the laws commanded by the ancestors. Girenshe begins his indictment. The accusation says that Aidar violated the sacred laws, and for this he should suffer severe punishment.

The word takes a young Azim. He talk about the power of love of the legendary Zhibek, Bayan and Leili. Mentioning Juliet. And he tells that to whom true love is known, death is not afraid of him either.

Azim turns to Syrtan, begging to be merciful to the young and ardent Aidar.

Girenshe is outraged by the speech of Azim. He sees in it a threat to centuries-old foundations. Along with this, he demands that Azhar be returned to her village.

Azim again objects to Girenche. He compares Aydar with a bird, and Abay with a bush, which protects the bird. Girenshe objected to Azim, insisting on strict observance of ancient laws and urged to follow the example of Biy Kengirbay, who did not know mercy for proud people like Aydar. Kengirbay ordered the execution of Enlik and Kebek, may the same punishment befall Aidar. Zhirenshe reminds Abay that judges of his family took part in the Kengirbay court. How can Abay now go against their views?

The word takes Abay. He angrily condemns Zhirenshe for his words. Abaу objects to the forgiveness of the Kengirbai court, which was committed many years ago. If a judge ruled unjustly, there is a people who see everything that does not remain silent.

From all sides voices are heard in support of Abay's speech.

The victory of Abaу and his supporters ends with the court of biys.

After the decision of the court of elders was announced, joyful people congratulate Abay, his students and Aydar with Azhar. Everyone disagrees.

Only Zhirenshe, Narymbet and Mes remain. They consider Abay to be the main culprit in their loss. They are plotting against Abai. «Abai is my implacable enemy. May I be damned if I do not destroy him». Narymbet passes a vial of Zhirenshe poison.

Kokby ineptly takes care of Karlygash, who makes fun of his words about love for her. Abai, Aydar and Azim enter. Abay chuckles at the unlucky boyfriend and sends Kokbay and Karlygash to prepare for the performance at the wedding feast. The voices of the people are calling for Aydar to sing a song. Azim asks Aydar not to sing a song about Enlik, fearing new excitements. Everyone is delighted with the new Аidar poem – «Enlik-Kebek». Abay sincerely rejoices in the success of his student. But Azim is not happy about this. He believes that the Aidar goes the wrong way, taking Abay with him. Azim himself believes in the justice of the laws of his ancestors and decides to kill the apostate. Overheard this Girenshe hands Azim poison.

The wedding feast begins. The festive dance begins, and behind it the bride's bride with her bows to distinguished guests and relatives. Imperceptibly, Azim sprinkles poison and gives the bowl to Aydar. Everyone asks Aydar to sing, but only after starting his song does the young poet fall. Aidar's song broke off.

Aydar is dying. He says goodbye to Azhar and regrets that he spent so little time with her. Abay and Azhar in oppressive sadness. Aidar asks: «Can a person die from a curse?» Abay denies this.

Everyone is shocked. Aidar's body turns black. This is poison. Abay orders the people to convene and mournfully announces the tragedy. The people are indignant and demands to find a poisoner. Kokbay accuses Girenshe of all troubles. But he swears his innocence. Syrttan's keen eye stops at Azim. The hand of a dying Aydar points to Azim. The people curses the villain and in anger leads him to reprisal.

Dark power won. Abaу is left alone in this darkness, like an unquenchable lamp shining on his people the path to his bright future.

The opera «Abay» - one of the best achievements of the opera art of Kazakhstan, the greatest musical and stage work of the three founders of Kazakh modern culture - composers A. Zhubanov, L. Khamidi, writer M. Auezov, still seems to be a certain result of the ascent to the heights of opera excellence in classical world understanding.

The libretto to the opera based on novel «The Way of Abaу» was written by Mukhtar Auezov. The hero of the novel is the famous Kazakh enlightener, philosopher, poet, writer, public figure, the founder of modern Kazakh written literature, the reformer of culture in the spirit of rapprochement with Russian and European culture - Abay Kunanbaev (1845-1904).

The music was authored by an outstanding musicologist, conductor, one of the founders of music education in Kazakhstan, Akhmet Zhubanov and composer, author of many songs of romances and waltzes Latif Hamidi.

The starting point in the creation of the opera was the music of Akhmet Zhubanov for the dramatic performance of the same name by Mukhtar Auezov. Back in 1940, Akhmet Kuanovich asked the author of the play to write a libretto for the opera, taking as its basis the same plot as in the expanded dramatic play, but making the text more concentrated and short.

The opera «Abay» is the story of the romantic and tragic love of two young people - Aidar and Azhar, the eternal struggle of conservatism and reformism, in the prism of which the light and dark sides of people are refracted. Against obsolete laws in the opera, Abaу and his disciple Aydar advocate. The opera «Abay» became the musical stage embodiment of the idea of ​​the triumph of love and freedom. The image of Abaу, like the oracle heroes of Greek tragedy, is perceived as the ethical conscience of the people. Between truth and falsehood, justice and treachery, kindness and envy, fidelity and betrayal, feeling and duty, all heroes make a choice. The image of Abay is consistently becoming more and more voluminous and is already perceived as the ideal of a person towards the finale, despite life contradictions and tragedies striving to be free at least in the choice of personal life, in love and self-expression.

The wonderful music of the two composers, nevertheless due to lack of professionalism and simply auditory experience in opera culture, did not allow the authors to completely solve the dramatic tasks and give the music an effective character. The orchestral palette was not fully used by them in the symphonization of musical material. However, all this does not prevent the listeners from completely immersing themselves in the different emotions and feelings of the characters - love, anxiety, joy, the bitterness of loss and the motives of hope. In the music of the opera, composers used the well-known songs of Abay: «Kоzimnіn Karasу» («You are the pupil of my eyes»), «Karagy tүnde tau қalyғyp» («Mountain Peaks»), «Қai Talgy» («Conversation»), «Ayttym Salem Kalamkas» («I send greetings to you, thin-browed ...»), «Uzyn kaiyn» («Birch»). The melodiousness of the musical solution, the close connection with the folk song heritage ensured the work's success.

The opera «Abay» was the first experience of Kazakh composers, and in Kazakh music it was only the tenth, while the West European opera culture has a three-century history.

The premiere of the opera «Abaу» took place on December 24, 1944 on the stage of the Kazakh Academic Opera and Ballet Theater, on the eve of the 100th anniversary of the great enlightener Abaу.