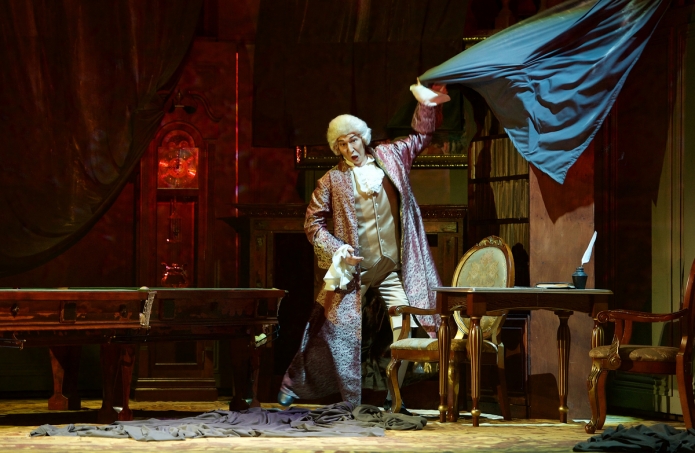 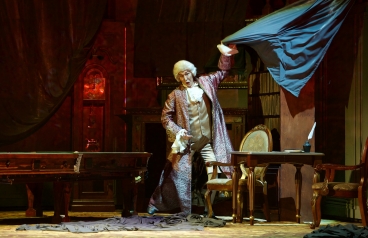 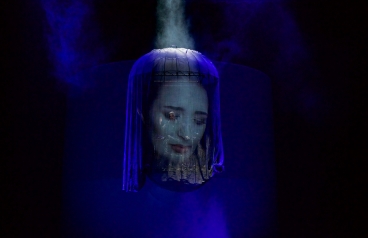 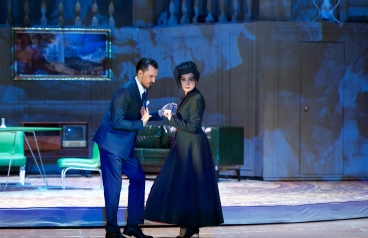 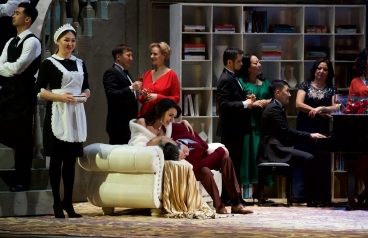 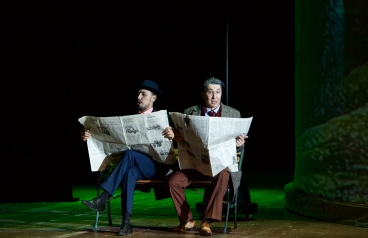 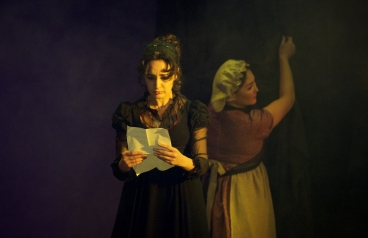 In his house, a rich and old bachelor, Don Pasquale, complains about his life. His friend, Dr. Malatesta, listens to the “suffering” of his comrade. The old man wants to marry his nephew to a rich bride and to “drive” him out of his house, because he himself wants to marry a young woman. However, Ernesto’s nephew resists, he doesn’t want to marry by order, because his heart has already been given to the beautiful Norina. The old man is furious. Ernesto can get out of the house on all four sides tomorrow.

Norina is alone. She recalls all her boyfriends - pretenders to the hand of a beautiful and young widow, but she loves only Ernesto. Dr. Malatesta enters the room. He talks about the intentions of Don Pasquale and offers Norina to teach the old man a lesson. Malatesta is still that cunning - he offers Norina to play the role of his sister Sofronia, the shy girl, who was brought up in the walls of the monastery, and then, with the help of an imaginary notary (her cousin Carlito), make a fictitious marriage between don Pasquale and Norina to show the old man “charms” family life with a young wife. Norina, without hesitation, gives her consent.

Young Ernesto sadly leaves the walls of his home, where he spent his childhood and adolescence. And at this time, his uncle - Don Pasquale, is heartily glad that he was able to get his nephew out of the house, and now he can start a new life with his young wife. The house includes Malatesta and Norina. Don Pasquale is fascinated by a young woman and immediately sends for a notary, who is supposed to seal their marriage. An imaginary notary Carlito appears at the door. You need a witness to marry. Ernesto bursts into the room, having come to say goodbye to his uncle. He is angry because the servants didn’t want to let him into the house. Ernesto in horror sees Norina in the role of the bride. Malatesta secretly, hastily explains the essence of the matter to him and persuades him to join the adventure by signing a contract as a second witness. Once the marriage is concluded, Norina immediately turns from a humble innocent girl into an enraged, angry and grumpy fury. She takes money and forces Don Pasquale to leave Ernesto in the house. Don Pasquale is horrified by his newly-made wife.

A few days after the marriage, the house of the old bachelor is completely unrecognizable. The house is full of servants, clerks from shops and shops. We see Norina. She is ready to go to the ball, but Don Pasquale is trying to stop her. However, the angry wife, having awarded Pascual with cuffs and slaps, does everything in her own way. From a letter, Pasquale learns that his wife tonight made an appointment in the garden for her lover. Servants and maidservants hired by Norina continue to ruin the house of Don Pasquale. Malatesta and Ernesto enter the room. Ernesto says that the trick with a message has been specially tuned to complete the draw tonight. Ernesto leaves the room, where Don Pasquale enters right there, and, going to his friend Malatesta, again complains about his life. From his wife, he sees nothing but swearing and cuffs. She doesn’t even let him close to herself. And to top it out, date the lovers. He asks Malatesta to help take Sofronia by surprise and get rid of her by terminating the marriage. Malatesta, of course, agrees.

Ernesto is waiting for Norin. She goes out, and the lovers communicate among themselves. Pasquale with Malatesta appear. Ernesto runs away, and Norina declares that there was nobody in the garden. The plan to expose his wife failed, Pasquale in complete despair. He offers Norina a divorce. Taught by bitter experience, Pasquale is ready to forever abandon the thought of marriage. Then Malatesta calls Ernesto, and they reveal to the old man the secret of his imaginary marriage. Pasquale is happy that he got rid of his wife and blesses Ernesto and Noreen. A happy ending awaits everyone.

For the first time, the opera “Don Pasquale” by the Italian composer Gaetano Donizetti on the libretto by Giovanni Ruffini based on Stefano Pavesi's play “Sir Marc Antonio” was released in Italy on January 3, 1843.

An order for the opera by Gaetano Donizetti was received in the autumn of 1842 from the theater manager Jules Gabriel Janin. At that time, the composer was working on the opera “Linda di Chamounix”, which was performed at the Italian Theater in Paris. The cast was truly "star": Julia Grisi, Marie di Candia, Luigi Lablach, Antonio Tamburini.

By the time of the creation of “Don Pasquale”, Gaetano Donizetti was at the zenith of fame, but these years cannot be called happy for him. However, despite the difficult state of mind, Donizetti took up the composition of the comic opera and created it - as usual - in short time. As it should be, according to the canons of classical comedy, the action of the opera Don Pasquale does not go beyond one place - at home, where the main intrigue unfolds.

The premiere of the opera “Don Pasquale” in Almaty on the stage of the Abay Kazakh State Academic Opera and Ballet Theater took place on October 9, 1955.

The opera went on stage for two years and no longer resumed.

After many years, one of the best operas of Gaetano Donizetti returns to the stage of the Abay KSATOB.

arte” , so famous we could find it in many others “opera buffa“, like for example in

“La Serva Padrona“ of Pergolesi, written almost one century before: an old man, rich and boring, who wants to marry a young woman, usually of lower social class, beauty and astute, who is in love with another man, younger like her, and and all the fun games of misunderstandings that can arise accordingly.

Also in this opera, which Donizetti calls “Dramma buffo in tre atti”, we have three men, the old man, the younger, and a good friend, all around a young widow, Norina, the true engine of the story, who manages to excel over all with her malice and cunning.

So we decided to move the story from the point of view of Norina, as a symbol of

women’s emancipation in the last centuries, passing through some of the most famous Italian ages: the 1800s, the last Rome of the Popes, the 50s, the age of “Vacanze romane”, and in our days, the 2019, in the luxurious and fashionable Italy…

First act, we are in Rome, at the beginning of 1800, the curtain rises just during the

funeral of Norina’s husband… later, after entering Don Pasquale’s house, and at the heart of the plot, the public will meet Norina at home, caged by the social conventions of the time, unable to live with the man she loves now.

As the story progresses, Norina with her feminine weapons becomes stronger and

stronger, in a new figure of a woman ... so in the second act the audience will be screened in the Rome of the 50s, where our singers will turn into the characters of the typical Italian cinema comedy, De Sica, Mastroianni, Sofia Loren.

And finally, for the third act, to talk about the triumph of Norina, which has become the strong modern woman more and more at the center of our society, we have chosen to move the tale to our days, to 2019, in the Italy of fashion and design.

This production, to create all these special effects and changes of time, will stage a complex scenographic setting, with a refined taste in recreating the Italian atmospheres and style, and the strong suggestion of video projections and video mapping, combining the modern technology to the world of opera.

I followed the same objective with the costumes, in the search for materials and lines according to the fashion of the different eras faced, for a great entertaining show,

widening the “Don Pasquale” to a fun ( I hope ) rhapsody of life, of love."