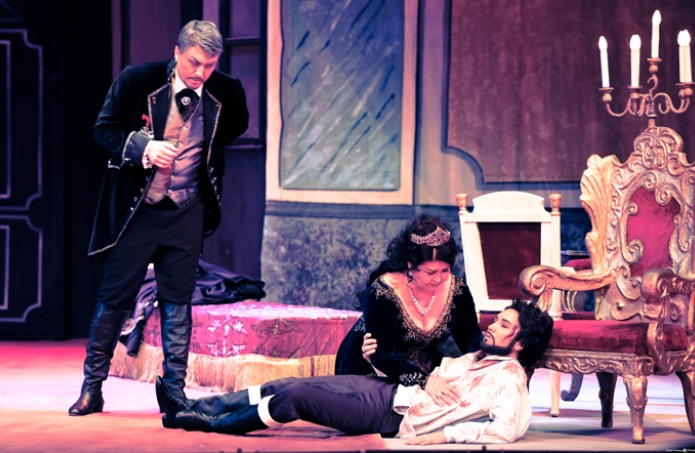 Giacomo Puccini
libretto by Giuseppe Giacosa and Luigi Illica,
based on the drama of the same name by Victorien Sardou 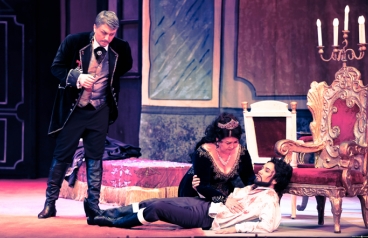 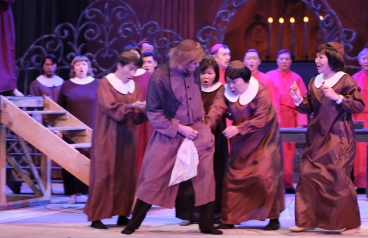 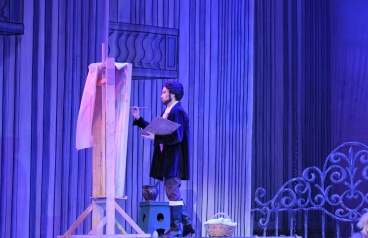 I action II action III action
Angelotti, a republican and fighter for Rome’s freedom, escapes from prison and finds shelter in the church of Sant’Andrea della Valle, where his sister has hidden the key to the Attavanti chapel and a change of clothes.
When the church’s doors are closed for parishioners, godliness gives way to art. Here, the painter Cavaradossi is working on a portrait of Magdalene. The Sacristan identifies a likeness between the portrait and the woman who often visits the chapel to pray zealously. The woman is Attavanti. She is the one who inspired the painter, but Cavaradossi’s heart belongs to Tosca.
Cavaradossi is alerted by a slight noise. Thinking that the church is empty, Angelotti comes out of his shelter. Cavaradossi recognizes the consul of the Roman Republic. The painter offers his help and assistance to Angelotti. Tosca appears. Cavaradossi hides Angelotti. Recognizing Attavanti in the beautiful image of Magdalena, Tosca is overcome with jealousy. Cavaradossi placates her; they shall meet in the evening in Tosca’s lovely little house. After seeing her off, Cavaradossi gives Angelotti a key to the house in the garden, and tells him that he can use the well as a hiding place in case of need.
A menacing bellow of the prison cannon is heard. The friends leave the church.
The church is filled with joyful altar boys: Napoleon is defeated! A victory celebration is to be held in the evening. Floria Tosca will sing a cantata before the queen. The chief of police and the gendarmes appear. They find evidence of the fugitive’s presence. Floria Tosca enters. The treacherous Scarpia decides to rouse the singer’s jealousy and shows her Attavanti’s fan, which he found there. In a frenzy of despair, Tosca decides to find her unfaithful lover and his lady. Scarpia sends his gendarmes to follow Tosca. Oh, Tosca! She is the only one who can make cruel Scarpia forget all his woes.
The baron is in his study. Nighttime. An orchestra is playing on the lower floor. It’s the queen celebrating the victory over Bonaparte. Scarpia sends Tosca a note, inviting her to join him after her cantata. He is sure than the haughty prima donna will be gracious for the sake of Cavaradossi. Spoletta enters and informs that the fugitive Angelotti was not found in Tosca’s house, but Cavaradossi was captured. An interrogation begins, but the painter is steadfast. Floria comes in and rushes to Cavaradossi; she hears a whisper: say nothing! The judge and the executioner take Cavaradossi away. Scarpia demands to know Angelotti’s hiding place. Tosca is staggered and worried. She can hear her lover’s moans through the wall… Floria will do anything to stop the torture, and she reveals the secret: “In the garden, in the well!” she shouts in a frenzy.
Cavaradossi is with her again. His first thoughts are of his duty. Learning of Tosca’s betrayal, Cavaradossi curses and pushes her away. The painter is sent to the dungeons.
Floria’s tears of despair rouse Scarpia’s passion. She is indignant to hear the baron’s vile suggestion.
But learning that Cavaradossi is to be executed in the morning and hoping to save him, the exhausted Tosca gives in to the Baron, but with one condition: he must grant Tosca and Cavaradossi a permit to leave Italy. And above all – he shall feign Cavaradossi’s death by ordering the firing squad to use blank cartridges. Scarpia signs the permit and tries to embrace her, but Tosca grabs a knife from the table and stabs Scarpia in his chest: “This is Tosca’s kiss!” Vengeance has been exacted.
The impregnable and rough walls of the Castel Sant’Angelo prison. Daybreak. A shepherd boy is singing a song. Cavaradossi is lead to the place of his execution by a group of soldiers. He cannot believe his eyes when he sees Tosca appear on the top of the tall tower. The astonished painter is shown the permit, and told the news of Scarpia’s death and the planned escape. Cavaradossi is amazed at the courage shown by his beloved. Happiness awaits them. They only need to live through this absurd mock execution. The men fire. Tosca rushes to her lover… He is dead!
Tosca is weeping over the body of Cavaradossi; she hears noises and the gendarmes shouting. Scarpia’s body has been found and she is to be arrested. Tosca runs to the parapet and throws herself off from tower…

«Floria Tosca» is a musical drama composed by the famous 19th century Italian composer, filled with expression and passion.

The plot is based on the story of a love triangle: singer «Floria Tosca», her lover - the artist Mario Cavaradossi and the chief of police - Baron Scarpia. However, against the background of the dramatic plot, the historical context of what is happening was not missed, which adds an expressive shade to the whole action - this is the struggle of Italian patriots for the unity and independence of their Motherland against its main enemy - Austria. The emperor Napoleon, who marched with his troops against the Habsburgs, wins a victory over her, and his plans do not include support for independence in Italy and the creation of the Roman Republic. He needs to restore the power of the Vatican. The music tells the audience that all the dreams of Cavaradossi and Angelotti of a bright and serene future will be mercilessly destroyed. A tragic ending is inevitable.

Rapid development of the plot, music that carries passions and emotions. The entire opera was transformed by the composer into a single, indivisible dramatic whole. Behind the love triangle lies a powerful energy, the Italian people longing for freedom and the struggle of the present with the past.