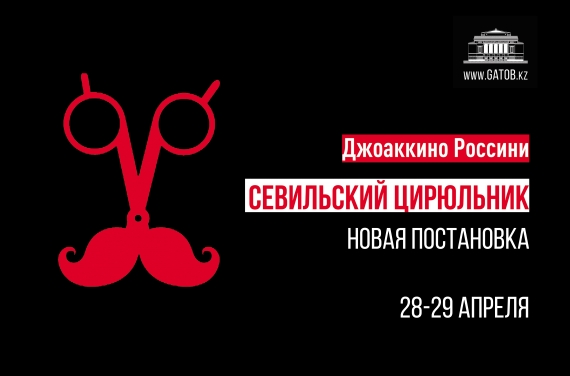 The Kazakh State Academic Opera and Ballet Theater named after Abay invites you on April 26, 2018 at 11.00 for a press conference on the occasion of the forthcoming premiere of the opera "II Barbiere di Siviglia" by G. Rossini.

In the press conference take part:

- Director and director of the opera company – Lyailim Imangazina, honored worker of the RK

" II Barbiere di Siviglia " by Gioacchino Rossini - a bright comedy opera based on the play by the French playwright Pierre Augustin Caron de Beaumarchais. The work captivates with wit, with unexpected plot twists, virtuosic vocal parts inherent in the traditional style of the Italian opera.

Rossini wrote the opera in less than twenty days. The original author's title of the opera was “Almaviva, ossia Vinutile precauzione”, since the plot of the play by Beaumarchais had already begun a series of operas by this time.

Despite the loud scandal surrounding the premiere, the opera “II Barbiere di Siviglia” awaited a resounding success. The public highly appreciated the work and even organized a triumphant torchlight procession to the house of Rossini.

In our theater the opera was staged in 1972 by People's Artist of the USSR Yermek Serkebayev. The Figaro`s party brought to Yermek Serkebayev a wide fame. Dmitry Hnatyuk called him "the king of baritones", Muslim Magomayev - "the best Figaro in the Soviet Union". With this party he performed at many opera theatres in Europe and the USSR.

The opera will be performed in Italian, in a new stage decision by the production group of the conductor Vittorio Parisi, familiar to the Almaty audience in staging the opera “Rigoletto”, director - Christine Hucke and the artistic director Patricio Perez, the opera will be played in the original version, in which the maestro will open the previously not performed earlier scenes.

On April, 28 and 29, Abay Opera House presents to your attention a new production of Rossini's masterpiece.