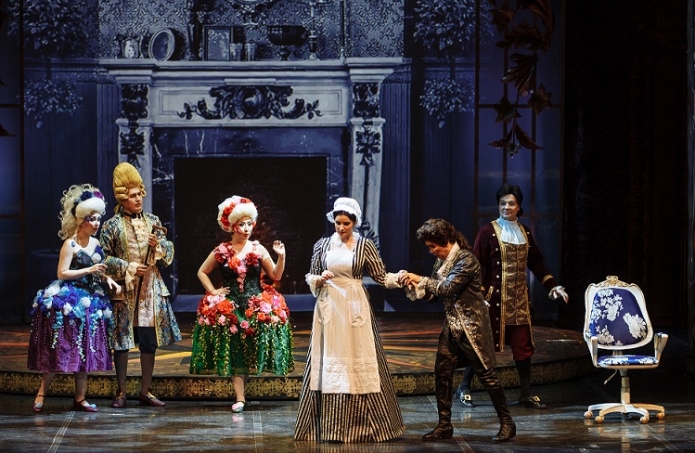 ALIDORO, philosopher in the service of the Prince

His daughters: CLORINDA and TISBE

Two centuries ago, on Christmas Day, at the request of the Roman theater Valle, in just twenty-four days, one of G. Rossini's best operas Cinderella, the full name Cinderella, or the Celebration of Virtue, was written. Her premiere took place in Rome on January 25, 1817, after which "Cinderella" became one of the most performed operas of the great composer.Famous fairy story of S. Perrault about a poor girl who met the prince, Gioachino Rossini and librettist Jacopo Ferretti turned into a comic opera, adding it with new characters, unexpected twists of the plot, sparkling humor and surprises. From the first sounds the opera captivates with its extraordinary beauty, wit and merriment, and of course, magic. In it, Rossini jokes over human weaknesses, submerging characters of the opera in various comic situations.200 years "Cinderella" adorns the repertoire of the best opera theaters of the world. And in the year of its bicentennial, Rossini's masterpiece was first presented in Kazakhstan on the stage of the Abay opera and ballet theatre! 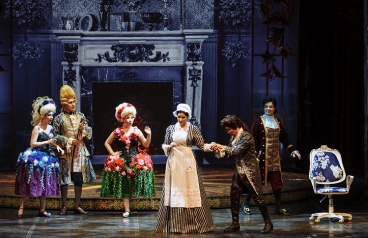 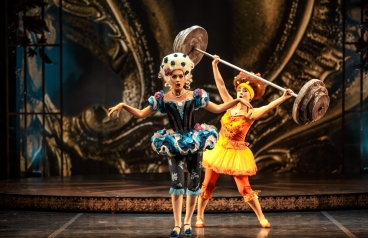 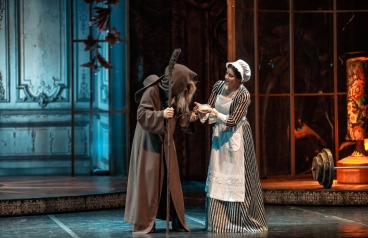 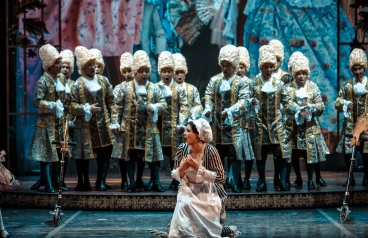 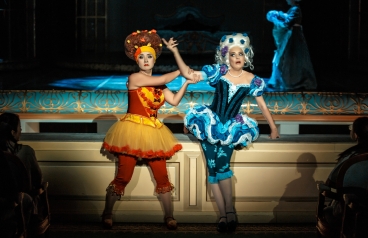 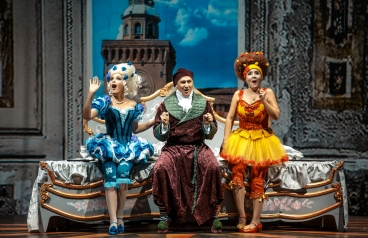 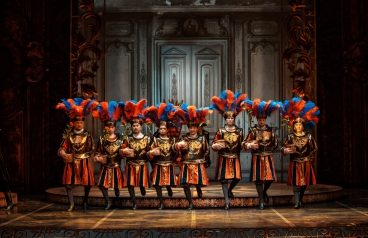 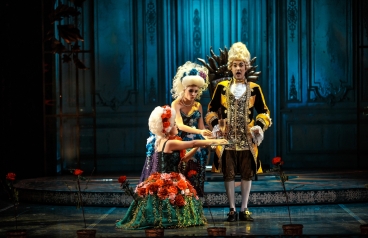 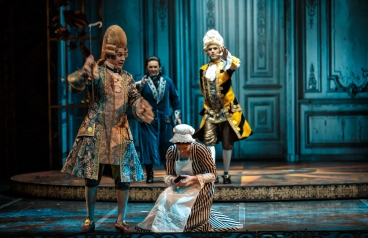 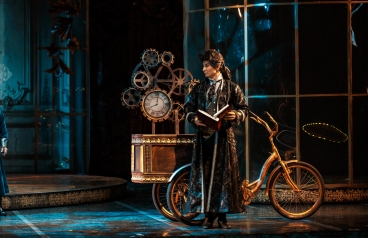 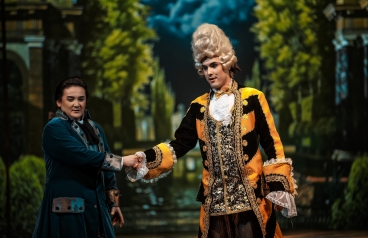 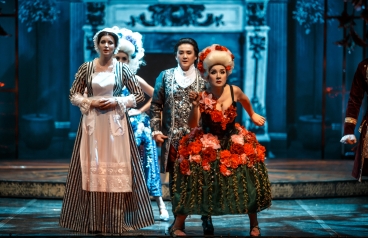 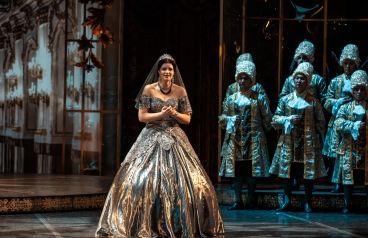 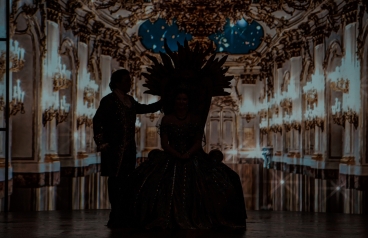 In the house of Don Magnifico everything is as usual: his daughters Tisbe and Clorinda are engaged in themselves, and the stepdaughter Cinderella (in Italian - Cenerentola) does all the homework. She sings a song about the king, who chose a bride of three sisters and chose not to take a vain girl as a wife, but a virtuous one.A knock on the door - a poor old man came. In fact, this is Alidoro, the tutor of Prince Ramiro. He is looking for a bride for the prince and deliberately came to this house poorly dressed to find out the characters of the girls. Clorinda and Tisbe try to drive away an uninvited guest, and Cinderella gives him coffee. Touched Alidoro promises her that the sky will reward her for her kindness.

The chieftains announce the visit of Prince Ramiro and hand invitations to the ball to the palace. Sisters begin to convulsively assemble, torturing Cinderella with errands. Poor thing is sad that she is not destined to visit the palace.Turns out, twittered by the twittering of sisters Don Magnifico. He is angry because he has not been able to see a wonderful dream. He saw a winged donkey in feathers, flew up to the bell tower. Magnifico tries to interpret the dream. Bell ringing? For the holiday! Feathers? These are his little daughters, his birds! Flight on the wings? Farewell, poverty and common people! So, the daughters will be profitable to marry, become queens and give him a dozen grandchildren. Finally the bankrupt baron will straighten out his affairs! And who, then, is the donkey? Yes it's him, Don Magnifico!

Prince Ramiro appears in the form of a valet. After exchanging clothes with his servant, he dreams of finding a sincere girl who will love him, not his title. Seeing Cinderella, he talks to her and, overwhelmed by her beauty and naturalness, falls in love with her. Cinderella also does not remain indifferent to a pleasant stranger.Ramiro solemnly announces to the owner of the house about the arrival of the "prince". Appears Dandini. Gorgeously dressed squire is taken as a true prince. Magnifico hopes that he will choose one of his daughters. Clorinda and Tisbe take flirting with the guest.

Cinderella asks her stepfather to take her with him to the palace, Don Magnifico in anger: did the maidens have to dance at balls? Alidoro, who appeared with the lists in his hands, says that, according to the documents, the owner of the house is not two, but three daughters. Don Magnifico convinces the guests that his third daughter has died. Cinderella tries to refute his words, but her stepfather threatens her with reprisals if she says a word. Ramiro is shocked by the rude treatment of the baron and the girl. Dandini notes that the comedy threatens to turn into a tragedy.Alidoro offers Cinderella to forget about sadness and go to the ball. Cinderella is astonished: is this possible? And attire? And the carriage? Everything is ready for her departure. He is touched by the excitement of the girl and admires her kindness and innocence - for these qualities are just as rare as real treasures.

Dandini as a prince, amusing himself, promises to appoint Don Magnifico as the chief cupbearer. The Baron descends into the wine cellar, leaving the daughters to entertain the prince.

Getting to his new duties, Magnifico dictates a new law: from now on, under the fear of hanging, it is forbidden to dilute the wine with water!

Dandini and Ramiro rejoice at their invention, which revealed the arrogance and impudence of the aspirants for the role of the bride. Tisbe and Clorinda find out without end from the "prince", whom he will choose. He replies that in any case the second sister will give it to his squire. The sisters are indignant: he is a commoner, moreover, with such an ordinary appearance!

Suddenly, the ball is interrupted by the appearance of a beautiful stranger. Everyone is intrigued and shocked. The family of Magnifico is concerned about the similarity of the beauty with Cinderella.

Dandini pursues Cinderella to confess her in love. But the girl tells him straight out that she loves another - his valet. Accidentally hearing this, Ramiro is delighted. Lovers are explained. But Cinderella unexpectedly leaves the palace. How to find a beautiful stranger? She left a bracelet for her lover. The girl, on whose hand will be exactly the same, is his chosen one. Ramiro, at last, puts on his clothes and goes on a quest. It is led by love itself. Dandini is forced to confess to Don Magnifico that he is only a squire, a servant. The Baron is destroyed - what a shame! He will become a laughing stock to all!

A thunderstorm breaks out. Annoyed sisters come home from the ball. Seeing Cinderella, they are convinced that this mess could not be that beauty at the ball. Alidoro adjusts the unexpected failure of the Prince's crew near the house of Magnifico. Ramiro and Dandini are forced to hide from the bad weather in the house of the Baron. Cinderella with amazement learns that the chosen one of her heart is a prince, and Ramiro sees on her arm a bracelet and is convinced that Cinderella is exactly the one whom he so passionately fell in love with. He leads her to the palace to play a magnificent wedding. Happy Cinderella with a light heart forgives both her stepfather and sisters.

The chorus announces: "The wheel of the changeable Fortune is always in motion: one reaches the top, the other - the bottom. And it happens that pride and vanity crumble to dust, and kindness and innocence celebrate their triumph! ".