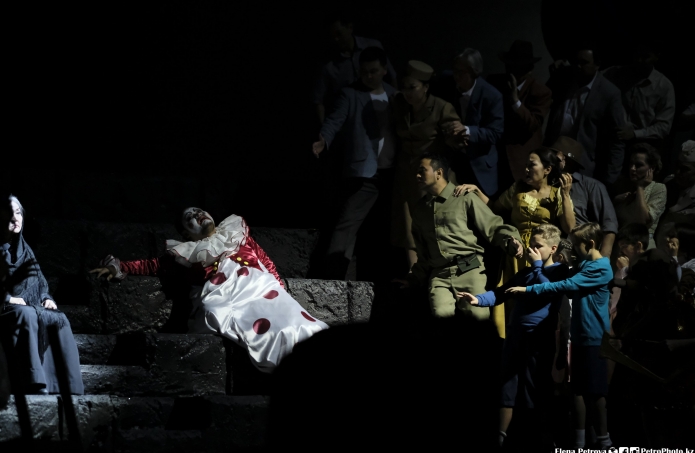 Production-conductor - ASKAR BURIBAEV, Honored Figure of the Republic of Kazakhstan 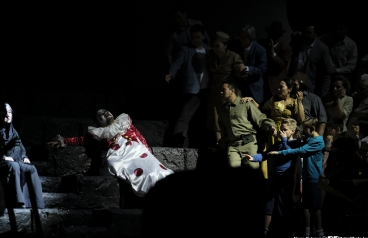 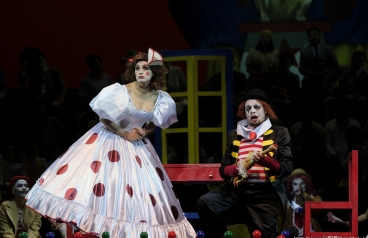 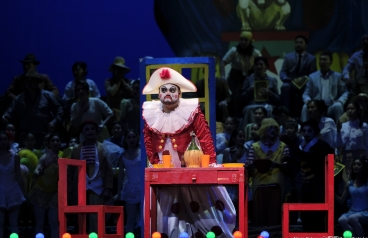 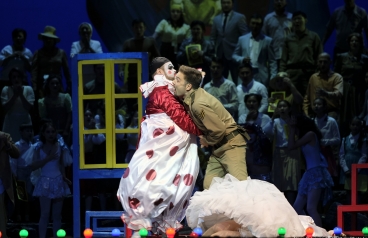 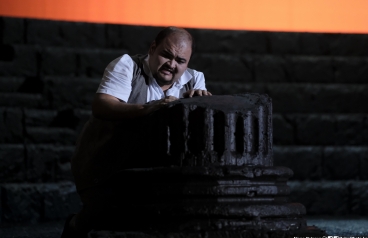 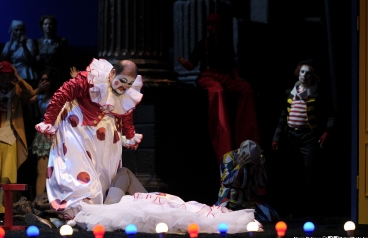 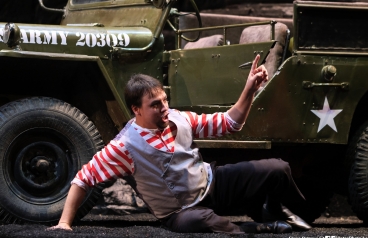 The opera opens with a character who calls himself «The Prologue». Later we will recognize him as Tonio and Taddeo. He tells the audience how this opera was written - it spilled from the heartof the composer (“The author tried to depict life itself ... and was inspired by the truth”). Then Toniosays that the actors are endowed with feelings and passions, like all people. These feelings andpassions - the main theme of the opera. Well, everything is ready and you can start the performance. The opera begins. In a small village, a crowd of people greet a troupe of itinerant actors. Loud cries accompany the exit of the actors, and the host invites everyone to the performance thatwill be given tonight. When Tonio, the clown in the troupe, tries to help Nedda, Canio, the owner ofthe troupe, rudely dismisses him, because Nedda is his wife, and he does not tolerate any signs of«knightly» attention to her - he is jealous madly and warns everyone not to think that she belongsonly to him. Do not give in to anyone who, in reality, encroaches on his wife and falls in love with herfor real, and not as the plot of the play, which they present to the public in the evening. After that, heand his friends go to the village for a drink, and those who stayed sing the charming Bell Chorus. Nedda remains alone. She is alarmed by her husband’s behavior. She sings an aria of happiness, known as «Ballatella» («Stridono lassu» - «In Azure Height»). With the end of Nedda’saria, appears the terrible hunchback - Tonio. He passionately tries to declare his love to Nedda, butshe laughs at him first, and then, when he continues to persevere, cools his fervor with a cane blow.Tonio leaves, swearing cruel revenge for this insult. Silvio appears. He persuades Nedda to drop everything and run with him. Nedda doesn’t dare, because their secret love is criminal and dangerous. Tonio leads his master Canio, who hearsthe last words of lovers. Silvio manages to escape unrecognized. In a terrible rage Canio runs afterhim, trying to catch up him, but in vain. Returning, he demands to give the name of her lover. She flatlyrefuses, then Canio in a rage pulls out a knife and threatens her. Her life is saved by Beppo, anotheractor from their troupe, who very incidentally appeared. He grabs the knife from Canio’s hand andreminds him and other actors that it is time to prepare for the perfomance. All diverge. Canio is leftalone. His heart is broken, but he has to play, because the audience is waiting for the show. The audience is come. Their buzz subsides with the beginning of the perfomance. Columbine (played by Nedda) listens to a serenade, which behind the scenes Harlequin sings to her,her lover (whose role Beppo plays). Soon comes Taddeo, a clown, whose role Tonio plays, in order toexplain his love to her - just like he (Tonio) did in life during the day. But in the comedy he is rejected.Harlequin fits in the window. He immediately pulls his ear out of the room of the admirer Columbine.This time, he kindly blesses the lovers, and the Harlequin trusts Taddeo to guard the door for the timethat he will spend alone with Colombina. Following this, Columbine and Harlequin sing a charmingduet at dinner. Suddenly, Taddeo rushes in frightened and interrupts them - this is Columbine’shusband, Pagliacci (Canio), who has returned. Harlequin instantly disappears through the window.But Pagliacci appeared just at the moment when they made an appointment. He managed to heartheir conversation. This is exactly what happened in the afternoon — literally the very words thatNedda said to Silvio. Canio, with an enormous effort of will, is trying to play his part of Pagliacci, butthis coincidence is terrible and unbearable for him.Suddenly, he tears off his theatrical costume and shouts: «No, Pagliaccio non son» («No! I am not a Pagliacci!»). He requires Nedda to name her true lover. A crowd of spectators applauds himso vehemently. Nedda makes the last attempt to save the performance - she speaks the words thatshould speak in her role, that is, refuses to name her (Columbine) lover (Harlequin). Canio in a ragecompletely loses his mind. In the end, he snatches the knife, and plunges it into Nedda. Dying, shecalls for help Silvio. He rushes out from the crowd of spectators, Canio in a rage kills him too.“La commedia e finita” (“The comedy is over”).

In the end of 70s of the 19th century, a new creative direction appeared in Italy, whichdefended the position of merciless truthfulness and reflection of the reality of life, with all itscruel realities and unrealizable romantic illusions. For writers of Verist, the most faithful literarygenre was the novel, in the center of which is a person who is doomed to a joyless existence.The operas by Italian composers Pietro Mascagni “Cavalleria Rusticana” and Ruggiero Leoncavallo “Pagliacci” became the most prominent representatives of musical verismo.Following the writers ’creative experience, the composers of the Verist also turned to the realdepiction of life.Both operas are written in a very concise one-part form. The main attention of thecomposers was given to the personal dramas of their heroes, and moreover conveyed by “bright,screaming tones”: no subtexts, just facts.The premiere of the one-act operas by P. Mascagni “Cavalleria Rusticana” andR. Leoncavallo “Pagliacci” on the stage of the Abay Kazakh State Academic Opera and BalletTheater took place in 2018. A creative group from Italy was invited to stage the performances:the director was Lorenzo Mariani, the set designer, the costume designer - William Orlandi, thelighting designer - Roberto Venturi and the choreographer - Luciano Cannito. Musical directorwas the Honored Figure of the Republic of Kazakhstan, Askar Buribaev.

It is noteworthy that in the 70s of the twentieth century in the Abay KSATOB the opera by R. Leonkavallo “The Pagliacci” was performed by with legendary singers: Rosa Dzhamanova(Nedda), Vasily Yakovenko (Canio), Arthur Amonov (Tonio), Kurmanbek Murzabekov (Silvio). Theconductor was the People’s Artist of Kazakhstan Bazargali Zhamanbayev.