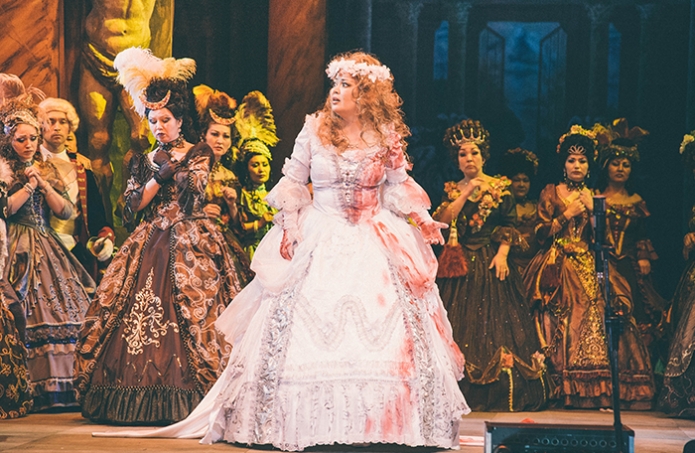 Opera in two acts
G. Donizetti
Libretto by S. Cammarano based on the novel “The Bride of Lammermoor” by W. Scott
Characters:
Lord Enrico Ashton
Lucia, his sister
Sir Edgardo di Ravenswood
Lord Arturo Bucklow
Raimondo Bidebent, Lucia’s tutor
Alisa, Lucia’s companion
Normanno, captain of the Ravenswood castle guard
Ladies and cavaliers, retainers, Lammermoor dwellers, pages, soldiers, servants.
The events take place in 18th century Scotland, partly in Ravenswood castle, partly in the ruins of the Tower of Wolf’s Crag.
I action II action
Two ancient families – Ravenswood and Ashton – have been at odds since old times. The conflict resulted in failure for one of them: Lord Enrico Ashton has usurped the Ravenswood castle. The previous owner of the castle is killed, but Enrico doesn’t feel like the absolute owner yet, for Ravenswood’s son – Edgardo – is still alive… Enrico’s worries are also exacerbated by money matters. His sister Lucia’s marriage to an eminent and powerful lord Arturo Bucklow could improve the family’s state-of-affairs, but, alas, Lucia refuses to marry. The girl’s tutor Raimondo Bidebent tries to assuage Enrico’s anger towards his sister, attributing her refusal to her grief over her mother’s recent death. But Enrico insists on her marriage.
The captain of the Ravenswood castle guard Normanno reveals the true reason to Enrico… It appears that the girl is in love with Edgardo Ravenswood! The young man also loves Lucia with all his heart, and risking his life, he comes to meet her on one of the alleyways in the ancient park.
Enrico is shaken. His sister’s love for their worst enemy brings disgrace upon the whole Ashton clan… The guards inform Enrico that they have spotted Edgardo near the ruins of the old tower, but did not manage to seize him. The castle’s new owner demands that the young man is captured.
The shades of the evening are falling upon Ravenswood castle. Lucia and her friend Alisa enter the park. The girls look around. Nobody is there. Edgardo, who is supposed to meet Lucia, is not there yet. Alisa reminds her friend about her brother: what if he catches Edgardo in the park? But Lucia thinks that her misgivings are groundless: Edgardo is very careful. Other things worry her. Once upon a time, a man of the Ravenswood clan – Edgardo’s ancestor – has murdered his wife in a fit of jealousy near the fountain, where they are standing now. The ghost of the poor woman has recently visited Lucia. Alisa is sure that it bodes ill: wouldn’t it be more sensible to end the dangerous affair?
But the wearisome wait is over. Lucia rushes towards Edgardo. However, her happiness is marred by unexpected news: the young man is leaving to France to seek support for the fight for the independence of Scotland. After exchanging vows of fidelity to each other, the lovers exchange wedding rings.

Enrico Ashton is still insisting on his sister’s marriage to lord Bucklow. His sister’s supplications and tears fall on deaf ears – he is adamant. When the girl decides to tell him that she is betrothed to another man, Enrico shows her a false letter bearing evidence of Edgardo’s unfaithfulness. Enrico Ashton gives orders for the palace to be readied for the wedding ceremony.

Lucia is in despair. Even her faithful tutor Bidebent cannot console her. Believing in Eduardo’s unfaithfulness he advises the girl accept her fate.

The groom is expected to arrive to Ravenswood. Ashton’s retainers have gathered – cavaliers and ladies, pages and soldiers, noble citizens of Lammermoor and their wives. The guests excitedly greet Lord Arturo Bucklow. Enrico cautions the groom not to be surprised: the bride might seem doleful. The reason for her grief is her mother’s recent death.
Bidebent and Alisa bring in the bride. Almost unconsciously, Lucia signs the marriage contract after the groom.
Edgardo’s sudden arrival throws everyone into confusion. Lord Bucklow’s guards unsheathe their swords. Edgardo is ready to fight. But Bidebent steps in between the enemies. He shows the marriage contract to Edgardo. The young man cannot believe his eyes: did his beloved betray him?! In a frenzy of despair he throws his engagement ring on the ground before Lucia’s feet, and demands that she returns hers. Then he turns to his enemies – Lucia is lost for him, why live? However, no one dares to spill the poor man’s blood. Edgardo leaves the castle unhindered.

Edgardo finds refuge in the old ruins of Wolf’s Crag tower in the dilapidated castle of his ancestors, and gloomily mulls over his past. He is interrupted by Enrico, who challenges him to a duel. The enemies decide to fight at dawn.

A wedding banquet in Ashton castle’s luxurious halls. The festivities are interrupted by the arrival of Raimondo Bidebent, who brings terrible news: Enrico’s sister has lost her mind in a fit of despair and has killed Lord Arturo. Lucia appears, looking miserable. Her eyes wild, she feels the murdered woman’s ghost again. Addressing an invisible Edgardo, she begs him to forgive her and falls unconscious.

Flattened by grief, Enrico asks Raimondo Bidebent to look after his poor sister. Raimondo curses Normanno for his treachery that has brought so many misfortunes.

Early morning. Edgardo arrives to the Ravenswood graveyard to fight with Enrico. The sight of somber guests leaving the castle worries him. He is told of the terrible events. The bell tolls, confirming the sad news.
Edgardo rushes to the castle. He wants to see Lucia. Bidebent stops him: Lucia is no more. Edgardo draws his dagger…
Edgardo’s death forever unites the lovers’ souls…