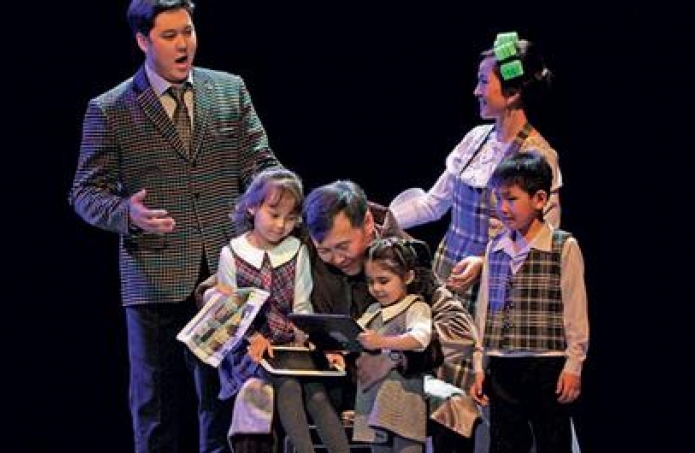 Production-director - MURAT SHALABAEV, Honored Worker of the Republic of Kazakhstan

Choreographer - GULZHAN TUTKIBAEVA, People's Artist of the Republic of Kazakhstan

A sweet conversation between lovers Serke and Aisulu on a moonlit night under the open sky is dampened by Aisulu’s announcement to her beloved Serke that she has been invited to compete in a beauty pageant. Aisulu dreams of becoming an actress and the pageant might be the first stepping-stone into the world of performing arts. Seized by jealousy, Serke doesn’t approve of her decision. Failing to find common ground the lovers end up quarrelling. Aisulu departs on her journey.

Restless everyday city life. Crowded. Maibatyr, an advertising agent, is putting up a beauty pageant ad. Passing him by, Aisulu asks for the address of the pageant. Amazed by her beauty, he shares this with his acquaintance Hasen, a young scientist, who has recently defended his master’s thesis. Maibatyr fervently describes the lovely girl Aisulu’s incomparable beauty and stature, and tells that the “Miss Kazakhstan” beauty pageant finale where Aisulu will compete will be held on the evening of the following day. Hasen, impressed by Maibatyr’s story, decides to attend the event. Maibatyr meets the young poet Aubakir and tells him about the beauty pageant, where the extraordinary beauty Aisulu is to compete. Aubakir becomes interested in the girl and he hurries to the pageant, in order to see, and maybe even meet her.
Meanwhile, full of guilt, Serke is trying to find his beloved backstage to beg for her forgiveness.
The closing ceremony of “Miss Kazakhstan” is underway. Serke enters the auditorium and finds a seat in the audience. Abdykadyr, a famous film director, presents the final contest. All the contestants come up on stage.
Zhansulu, the poetess comes up on stage according to her numerical order and reads her own poems. Hasen, having just met Serke in the audience, tells him that he came looking for the beauty named Aisulu. In order to protect his love, Serke introduces the talented poetess to him as Aisulu, and vividly describes their feature together. Giddy with happy anticipation, Hasen is daydreaming of their wedding. He goes backstage to meet Zhansulu, who he thinks is called Aisulu. A girl named Nursulu appears on stage, showcasing the audience her dancing talent. Aubakir captures the dancer’s every gracious move on his camera. He falls in love with the dancer’s beauty and talent. Serke, realizing that he is there to meet Aisulu as well, introduces the dancer to Aubakir as Aisulu. Aubakir is on cloud nine, believing that the gracious dancer is Aisulu. Aisulu is the next contestant; she sings a song.
The audience is pleased with her performance; they applaud and express their delight at her skill and beauty. By a unanimous decision the jury awards her the title of “Miss Kazakhstan”. Aisulu’s friends congratulate her on her victory.
Abdykadyr, his assistant Gulshara and the assistant girl notice Serke hanging about the entrance. Seeing that his nephew Serke is very upset, Abdykadyr devises a plan of how to reconcile them and offers Serke the role of Aisulu’s beloved in the future film he is currently shooting.

On the film set. The Studio staff is having a break. Aubakir is trying to find Nursulu, still thinking that her name is Aisulu. He asks the assistant director Gulshara for Aisulu’s mobile phone number. Gulshara decides to play a prank on Aubakir and instead gives him the phone number of Aisulu’s friend, the make-up artist. By chance, Aisulu answers the phone instead of her friend. She is surprised and confused to hear that Aubakir wants to talk to another girl by none other than Serke. Hasen enters, also looking for an Aisulu (Zhansulu). He claims that he was also sent by Serke! Having talked to Aubakir and Hasen, Aisulu is at a loss, and she cannot explain Serke’s actions.

Abdykadyr announces that the shooting is to be started. According to the script Aisulu is waiting for her beloved. Serke drives in on a car. The girl cannot believe her eyes! Serke moves towards her, opening his arms for an embrace. But Aisulu, hurt by his behaviour, slaps his face. Uttering “Did I ever ask you to find me a husband?” she covers her face with her hands and runs away. Serke runs after her. Abdykadyr’s plan has failed miserably.
Together with his filming crew Abdykadyr comes up with a new cunning plan of reconciliation: upon Aisulu’s return Gulshara delivers the sad news – Serke, unable to bear the heartbreak, has died. Stricken with grief, Asiulu rushes to Serke’s “body”. Crying, she lays down flowers on his chest. Suddenly Serke starts sneezing – he is allergic to flowers!
Aisulu is petrified. Not having expected this, she faints. Confusion ensues; everyone is trying to revive her, running about, spraying her with water. Aisulu regains consciousness. Seeing Serke, and making sure that he is alive and well, she is happy! Hasen and Zhansulu, Aubakir and Nursulu, having found each other, join Aisulu and Serke. This is the beginning of a real feast of love and youth.

Sydyk Mukhamedzhanov wrote the first comic opera in the history of the Kazakh musical theater. The libretto of Kuandyk Shangitbaev and Kanabek Baiseitov is based on the life of modern Kazakh youth, and at its center are comedic situations in which lovers fall. For the first time, a comic opera was staged at the Opera and Ballet Theater. Abay in Alma-Ata in 1964. Of the four operas created by the Kazakh composer Sydyk Mukhamedzhanov, the opera Aisulu brought him the greatest fame as the author of the first comic opera in Kazakh musical art. Some arias and individual musical fragments from this opera became popular - such as Cavatina Serke, Aria Aisulu and the waltz from the first act.

“Unfortunately, there are not many Kazakh national opera performances in the repertoire of our theater, and they are mostly of a tragic character. Please note: in the opera “Birzhan and Sarah” Birzhan dies, in the opera “Kyz Zhibek” Tulegen is killed, in the opera “Abay” Aydar was poisoned ... It would be unfair to ignore the only, perhaps, Kazakh comic opera created by Sydyk Mukhamedzhanov, ” tells the director of the opera - Murat Shalabaev.

The new production of the opera is based on a plot from the life of modern youth, whether in the 80s of the twentieth century or in the tenths, already twenty-first. The authors of the first libretto of 1964 were Kanabek Baiseitov and Kuandyk Shangitbaev, the second version was made in 2014, its authors were Askhat Mayemirov and Murat Shalabaev. And, it should be noted, it is significantly different.

The plot of the play tells about the life of young people in the period when they are looking for their soul mate, their love. The main character Aisulu, having left for a beauty contest without the consent of her young man, realizes that all career ups are nothing if there is no loved one nearby. Through the songs performed by Aisulu, one can feel the purity and naivety of the girl.

The musical language of Sydyk Mukhamedzhanov possesses the beauty of Kazakh traditional music, its melodiousness, melody and originality. The melodies express all the feelings experienced by the heroes of the opera - sadness, joy, love, admiration. They cause some degree of nostalgia due to the lack of such musical works at present.

The scenery of this production is modest enough for a modern beauty contest, during which all actions unfold. Unless this is a competition of a provincial town, there is not enough glitter, rhinestones and glamor: a modest beauty contest, with the exception of a beautiful curtain with a picture of a crown made of Kazakh patterns in gold. But at the same time, individual outfits of characters are made in such a way that they make the viewer smile: funny men's costumes made of fabric in a cage, an advertising agent’s vest, a retro car restored by theater workers.