Aidar: akyn, a student of Abay

Production-conductor - ALAN BURIBAEV, Honored Figure of the Republic of Kazakhstan 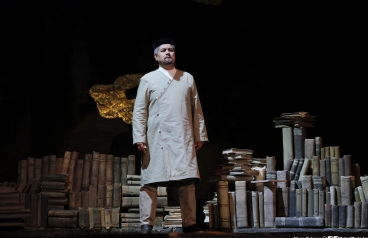 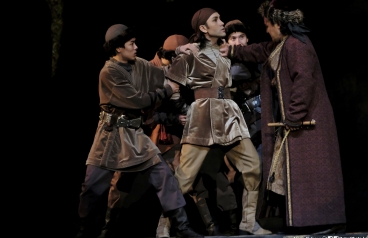 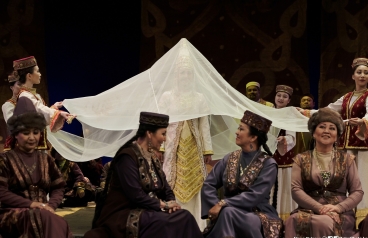 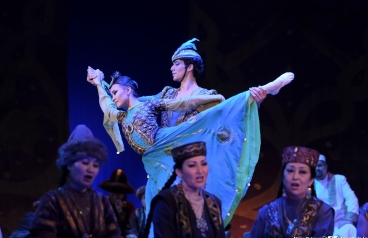 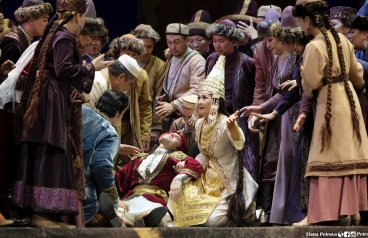 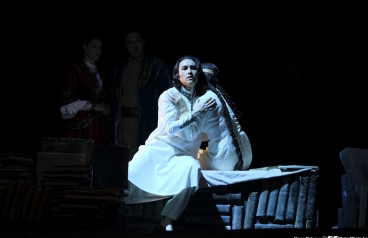 I action II action
Nighttime. Azhar runs out – she and her beloved Aidar are being pursued. Aidar appears and informs sorrowfully that his horse has died, and they cannot escape the infuriated relatives of Narymbet, who by will of fate was appointed to be her husband, although Abay’s village was very close now. Azhar begs Aidar to continue on without her, but he refuses: “To roam in shame for the rest of my life?! I would rather die!” Their pursuers appear, crying out: “Seize them! Bind them!” They throw a noose around the young lovers, with the intent of executing them by tying them to horses and sending the horses galloping across the steppes. Azhar and Aidar say goodbye to each other. Aidar desperately calls out for his teacher Abay.
Abay appears, followed by Aidar’s friends – Kokbai, Azim, and others. At first, Abay tries to ask them to spare the lovers, but seeing the pursuers’ determination, he orders Kokbai to cut the rope. Narymbet’s relatives lead the clan chief Zhirenshe invoke ancestral laws. Abay demands a people’s court. Zhirenshe is confident in the outcome; he orders his people to set Aidar and Azhar free, and threatens Abay with defeat.
Azim is alone, pondering whether Aidar is guilty. Zhirenshe enters and asks Azim for help in returning Azhar to his village. It would bring peace and quiet, which Azim wants as well. Zhirenshe says: “You might be close to Abay, but the people are your friend. And even if merciless wrath is to fall on Abay, you will not be punished!” He leaves Azim with his thoughts.
Abay and Aidar enter. During their conversation Abay encourages Aidar to write poems. Azim thinks that Aidar's poems will only serve to infuriate the enemies and accuses Aidar of stoking the fires of enmity. But Abay thinks that “silence cannot produce poems. The heat of struggle inspires the mind!”
The elder Syrttan comes to hear what Azhar has to say, as she has no right to speak to the court and to defend herself. Azhar tells of her desperate life and her feelings for Aidar. Upon hearing her sincere and touching words Syrttan leaves in deep thought, telling her that he will announce the sentence after the hearing tomorrow.
Left alone Abay decides to everything in his power to defend the young lovers.
The court. The assembled people are worried for the fate of Azhar and Aidar. During his first address Syrttan calls to discuss the issues of ancient laws. Zhirenshe advocates the priority of forefathers’ customs, for they help to keep the peace in the steppes. Azim is his opponent. He proclaims the importance of human feelings, talks about the power of love, illustrating with the examples of Zhibek, Bayan, Leila, and Juliette. He asks that Aidar be forgiven; youthful love should not lead to clan feuds. Zhirenshe is ready to spare Azhar’s life if she returns to her village, but wants to execute Aidar, to stop the breaking of ancient laws in the future. He illustrates this with an example of the elder Kengirbai, who had condemned Yenlik and Kebek to death in the ancient times. Zhirenshe also accuses Abay, who defends the violators of the law. Abay asks to speak and in his speech reminds everyone that after his severe decision Kengirbai was feared and avoided by everyone. He pleads that no blood be spilled, or this day would forever be remembered in sorrow and shame.
The Elder Syrttan admits the guilt of the young lovers, but none of them were to be executed. As the respondent, Abay will pay the damages, thus absolving Azhar and Aidar in front of the court.
Happy for the outcome, the people congratulate Abay, his students, Azhar and Aidar. Everyone leaves. Only Zhirenshe, Narymbet, and Mes remain; they blame Abay for their defeat and swear to kill him. Narymbet passes on poison to Zhirenshe.
Wedding preparations. Kokbai clumsily courts Karlygash, who mocks his words of love for her, suspecting base motives. Abay, Aidar and Azim enter. Abay makes fun of the hapless admirer and sends Kokbai and Karlygash to prepare for the wedding performance. Voices are heard, asking Aidar to sing. Azim asks Aidar not to sing about Yenlik, as they might cause more tumult. But Aidar leaves without listening to him. In Azim’s opinion Aidar has chosen the wrong path, leading Abay astray. Azim believes the ancient laws are just and decides to kill the perpetrator. Zhirenshe, who has been eavesdropping, hands him the vial of poison.
The Wedding begins. Abay is content. Kokbai gives the young poet Aidar the “rebel” quill. The festive dance commences, followed by the opening of the bridal veil and the bride paying respects to esteemed relatives and guests. Azim spots an opportunity and adds poison to the cup that he gives to Aidar. The dancing continues, under the accompaniment of a lyrical song “Karlygash”.
Aidar is asked to sing again. He sings «I send my hello to you, black-browed beauty» and suddenly collapses.

Aidar is on his deathbed. He says goodbye to Azhar and laments that he cannot spend more time with her. Abay and Azhar are despondent. Aidar says: “Can a man be killed by a curse?” Abay denies such a possibility. Then Aidar, showing his chest, asks: “What is this sickness?” To everyone’s astonishment his body has turned black! Aidar answers his own question: “I’ve been poisoned!” Abay sends Kokbai to gather the people and ruefully tells them the news. The people are furious and demand that the poisoner is captured. Kokbai points publically at Zhirenshe. The people clamour for a confession, but Zhirenshe wishes to swear his innocence to the elder Syrttan. He accepts it. Zhirenshe points at Azim, telling him to swear too. Azim refuses and flees. He is cursed. Azhar cries mournfully. Unbroken, Abay still believes in his people.

The "Abay" opera, created by the creative union of composers Akhmet Zhubanov and Latif Hamidi, as well as the writer and author of the libretto, Mukhtar Auezov, annually opens the theater seasons of the Abay KSATOB.

The starting point in the creation of the opera was the music of Akhmet Zhubanov for the dramatic performance of the same name by Mukhtar Auezov. Back in 1940, Akhmet Kuanovich asked the author of the play to write a libretto for the opera, taking as its basis the same plot as in the expanded dramatic play, but making the text more concentrated and short.

The opera “Abay” is the story of the romantic and impossible love of two young people - Aydar and Azhar, the eternal struggle of conservatism and reformism, in the prism of which the light and dark sides of people are refracted. Against obsolete laws in the opera, Abai and his disciple Aydar advocate. The beautiful music of the two composers allows you to completely immerse yourself in the different emotions and feelings of the characters - love, anxiety, joy, the bitterness of loss and motives of hope.

The premiere of the opera “Abay” took place in 1944 on the stage of the Kazakh Academic Opera and Ballet Theater. The first director of the performance was Kurmanbek Zhandarbekov, the scenery of the artist was Kulakhmet Khodzhikov, and the conductor was Leonid Shargorodsky.

In 1958, the director of the theater Baigali Dosymzhanov carried out a new edition of the opera. And for many years, the opera retained this historical setting. However, in 2014 GATOB them. Abay presented to the public a new version of the opera staged by Italian directors, choreographers and artists.

The opera “Abay” is one of the best achievements of the opera art of Kazakhstan. Names of the first performers of the main parts are inscribed in golden letters in the musical history of our country: Rishat Abdullin and Kanabek Baiseitov (in the role of Abay), later this image was embodied by Ermek Serkebaev and Gafiz Yesimov, Kulyash Baiseitova, Shabal Beisekova and Roza Zhamanova were inimitable in the party Azhar, Anuar, Anuarbek Umbetbaev, Baigali Dosymzhanov, Nariman Karazhigitov and Alibek Dnishev more than once embodied the image of Aidar in love on stage.