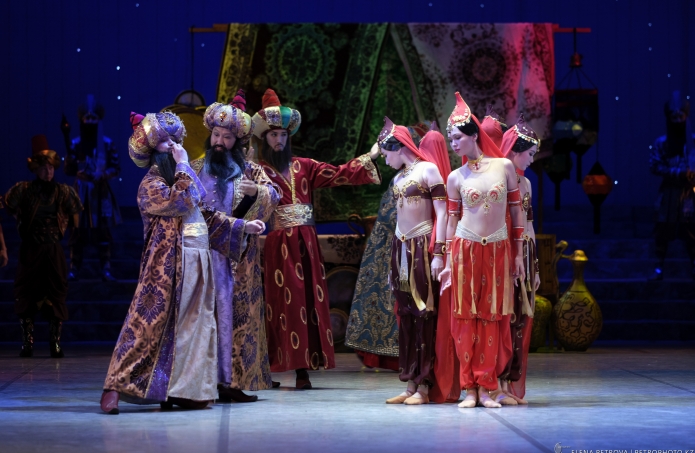 based on the poem of the same name by J. Byron

Duration of the performance: 1 hour 50 minutes | Number of intermissions: 1 |

Conrad, leader of the corsairs

Production-choreographer - Gulzhan Tutkibayeva, People's Artist of the Republic of Kazakhstan

Assistant of the set designer - Yessengeldy Tuyakov, Honored figure of Arts of the Republic of Kazakhstan

Costume Designer - Vyacheslav Okunev, People's Artist of Russia, Laureate of State Prizes of the Russian Federation and the Republic of Kazakhstan 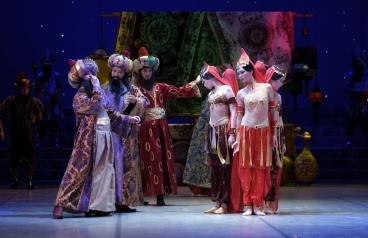 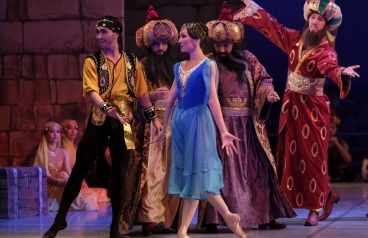 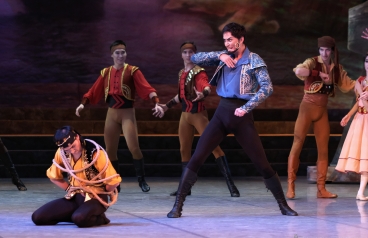 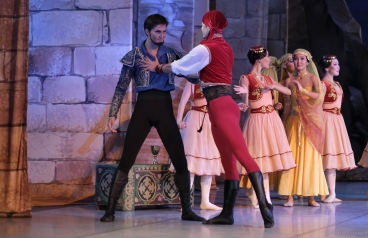 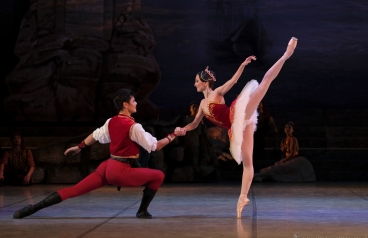 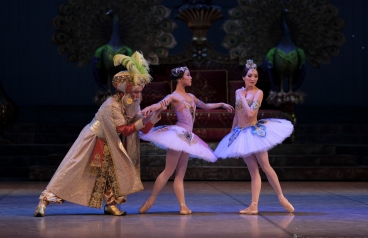 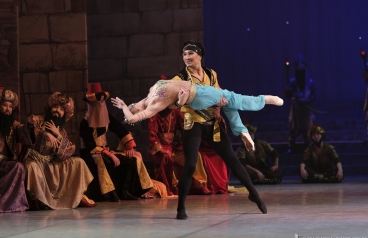 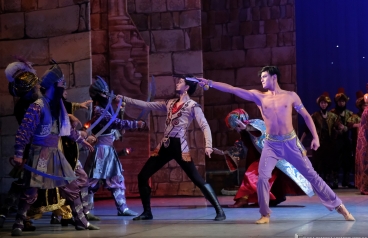 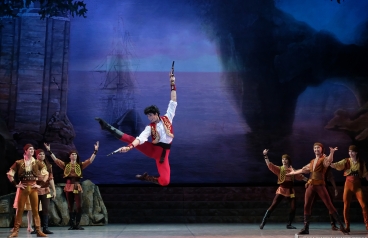 Three daredevils on a sailing ship are fighting against the sea.

The sailboat is dying ...

Near the wreckage of the ship, thrown ashore by the waves, there are three young men who survived. Greek girls find them. Medora especially likes one of them - Conrad. He talks about the shipwreck, about himself and his friends Birbanto and Ali.

The girls report the approach of a detachment of Turkish soldiers. Medora and Gulnara hide the corsairs, but they themselves are captured.

The slave trader Isaac Lankedem, who tracked down the girls and led the detachment, is pleased. He pays generously to the officer.

The corsairs are unable to help the Greek women now, but they vow to save them.

Lankedem shows his slaves to the merchants gathered at the bazaar square. In the place of honor sits Seid Pasha, who wants to get new beauties in the harem. Gulnara catches his attention and he buys her. The slave trader shows Medora. She is so good that Seid Pasha is ready to buy her at any price. At this time appears a noble merchant. In his face Medora recognizes Conrad. He gives the girl a sign not to give him out, the «merchant» begins to bargain, setting an unheard-of high price. Seid Pasha is amazed and invites the rich stranger to identify himself. The «merchant» and his retinue shed their rich clothes and armed corsairs appear before the astonished Seid Pasha and the merchants. They kidnap Medora, the slaves, take Lankedem with them and go out to sea. The Turkish guard can’t longer stop them. Seid Pasha is furious.

The corsairs are content with the rich booty they have taken from the merchants. In honor of the saved beauties, they arrange a holiday. The girls join in the fun. Medora, answering to Сonrad's request, dances with him and his friend Ali. The corsairs are delighted with the beauty of the leader's chosen one.

The girls ask Medora to persuade Conrad to let them go home. Conrad agrees, but Birbanto, with the other corsairs, protests. They demand to leave the girls on the island. A quarrel begins. Conrad still insists on his own. Together with Medora, they escort the girls to the seashore.

Birbanto is furious. At this moment, the captive Lankedem, calls him. In exchange for his freedom, he offers Birbanto to take revenge on Сonrad. After some thought, Birbanto agrees, and they plan to add sleeping pills to Сonrad's wine. The leader of the corsairs falls asleep.

Waking up, Сonrad discovers the disappearance of his beloved, he vows to find and free her.

Seid Pasha admires the beauty of Gulnara. Because he doesn’t like other girls-slaves offered by Lankedem. Then the slave trader brings Medora inside the beautiful «lively garden» which the girls form. Pasha is delighted. He buys her.

Corsairs appear in the palace under the guise of pilgrims. Pasha invites the «pilgrims» to the evening prayer, in one of them Medora recognizes Conrad. The corsairs are fighting with the Pasha's guards and save Medora.

On a free ship, rushing under full sails into the stormy sea, - Conrad, Medora and their friends ...

The premiere of the performance at the Abay SATOB took place on November 28, 29, 2020

The ballet «Le Corsaire» has been considered a bright pearl in the collection of world musical classics for more than one and a half hundred years.

Along with another famous masterpiece of Adolphe Adam, the ballet «Giselle», it is included in the golden fund of the world ballet repertoire. The libretto is based on the poem of the same name by Byron. Before Adam, Byron's poem was carried to the music scene by other composers, in particular G. Verdi composed the opera of the same name in 1848. Ballets were also staged. The first well-known ballet production under the same name was staged at the Teatro alla Scala in Milan in 1826, choreographed by the Italian choreographer Giovanni Galcerani, but all these ballets hadn’t survived to our days.

The premiere of the ballet took place on 23 January 1856 at the Paris Opera, and two years later on 12 January 1858 «Le Corsaire» was staged for the first time in St. Petersburg by the famous choreographer Jules-Joseph Perrot. Perrot himself performed the part of Seid Pasha, and Marius Petipa «with great energy» performed the role of Сonrad.

Librettists of 19th century ballet performances Jules Henri Vernoy de Saint-Georges and Joseph Mazilier created a colorful picture of the life of corsairs. Since the staging of the performance, the choreography has changed, musical numbers have been added, but the plot remains the same from 1856 to the present day. «Le Corsaire», which appeared straight ahead in the middle of the 19th century, bears a vivid imprint of the aesthetics of romanticism.

Adam is considered one of the best melodists among composers of the 19th century. His ballets «Giselle» and «Le Corsaire» occupy an honorable place in the repertoire of major ballet companies around the world. At the Abay Kazakh State Academic Opera and Ballet Theater «Le Corsaire» was staged, in first time, in 1993 by Novosibirsk ballet master - Vladimir Vladimirov, where the leading ballet soloists shone in the main roles: Kuralai Sarkytbaeva, Murat Tukeev, Dmitry Sushkov, Ulan Badenov, Serik Turabaev, Yerzhan Doskaraev, Zhumat Kartamysov. The part of Medora was performed by the prima ballerina of the theater - Gulzhan Tutkibayeva.

And today, your attention will be presented a new production of the ballet, modern, enchanting, exciting, dynamic, where Gulzhan Tutkibayeva now has a role as a production-choreographer. The new performance will be a gift to the audience. It staged by conductor Yerbolat Akhmedyarov, set-designer William Orlandi, assistance of the set designer Yesengeldy Tuyakov, costume-designer Vyacheslav Okunev. Classical choreography, modern, technically complicated scenography, original costumes and music are organically intertwined in ballet, which will be remembered by the audience for its extraordinary grace, danceability and vivid imagery.

«The work with the last creation of Adolphe Adam, the ballet «Le Corsaire», is being carried out on the stage of the Abay KSATOB on the eve of the 165th anniversary of the ballet premiere.

Previously, «Le Corsaire» was shown on the stage the Abay KSATOB in the period from 1996 to 2006. However, it wasn’t a new production, it was a transferred version of the Novosibirsk State Academic Opera and Ballet Theater. The performance with all the decorations, lighting and musical decisions, costume design, and the most important thing with the choreography by Vladimir Vladimirov, the artistic director of the ballet, was donated to our theater. In the difficult years of «perestroika» (in the former Soviet Union - the policy or practice of restructuring or reforming the economic and political system), such a gift was considered a great luxury. Gradually, due to the deterioration of the sets and costumes (the performance was donated by the Novosibirsk people after several years of operation on stage), the production was removed from the repertoire, although it always attracted the audience.

Today, undoubtedly, for the connoisseurs of ballet art the premiere of the new version of «Le Corsaire» from the Kazakh production-choreographer Gulzhan Tutkibayeva will become a grate celebration of the Ballet!»

Aya Kalieva, director of the Abay KSATOB, Honored Figure of the Republic of Kazakhstan.

«More than 160 years have passed since the first production of «Le Corsaire», and there were a lot of performances. They are based on the music of Adolf Adam which was orchestrated by the author himself, and later by various musicians and composers: L.Minkus, R.Drigo, A.Dvorak, P.I.Tchaikovsky, Y.Kornblit and other composers for their productions. There are about 4-5 variants of orchestrations of the ballet «Le Corsaire» in the world.

In the new production we will try to get a fuller and more interesting sound of the orchestra. The highlight of our version is the insert number for the musical intermission, in which we used the overture from the opera «La Poupee de Nuremberg» («The Nuremberg Doll») by Adolphe Adam. I am sure that the new production of the ballet «Le Corsaire» will become an amazing event in the cultural life of our Almaty, all of Kazakhstan, and will win the recognition and love of the public.»

«The ballet «Le Corsaire» is loved all over the world. After all, this is an immortal classic. There are many versions and different variations of this performance. We want to stage our version, for our theater, for our troupe, for our soloists, which will allow them to show their acting talent and technical capabilities as brightly as possible. «Le Corsaire» is a romantic adventure ballet. My task is to make a production of a dynamic, lively, colorful, exciting, modern performance. We want to give opportunity to audience to feel like an integral part of the action and want to be inside this performance. The costumes for the ballet were created by the People's Artist of Russia - Vyacheslav Okunev. As always, they are distinguished by their unique style. The scenography was developed by the Italian set-designer William Orlandi. His idea carries in itself a completely different, unusual for us construction of scenery, a feature of which is their movement during the action. This will give the performance a new sense of stage space and dynamics. And saturation of the production with video content will create a more realistic and artistically holistic perception of the ballet.»

«The scenography of the ballet «Le Corsaire»» by the set designer William Orlandi is a conceptually new artistic solution of the stage space.

Transforming scenery - sliding walls along the stage, falling, rising objects create a vivid perception of what is happening on the stage. Volumetric constructions, picturesque scenery with video – graphics, add spectacular perception to the audience.

An adventure story, inventive scenography, reincarnation of images, create a stage spectacle. Complex constructive decorations, engineering ideas, embodied on the stage, transform from one state to another in front of the viewer's eyes, thereby creating a life space.

Everything conceived by the set designer was carried out on stage thanks to the well-coordinated work of the theater technical team.

I consider it an honor to continue the work of a highly professional set designer with a worldwide reputation. Having carried out the production at a professional level and be competent in its ideas, introduce technical innovations and perfection, applying new modern technologies in engineering, calculations, creating a model, stage mechanics with the legendary collective of the Abay Opera and Ballet Theater, proves that in our Republic, and in in the theater, there are highly professional technical team and team, such as stage designers, choreographers, etc. for opera and ballet performances.»