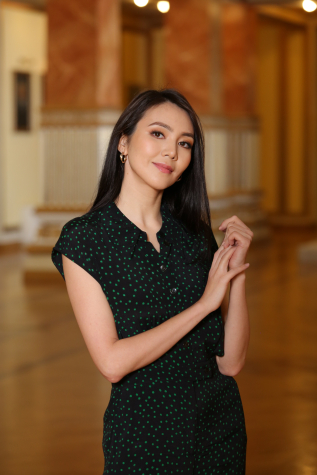 In 2005 she graduated from Almaty Choreographic College named after A.Seleznev.

In 2012 she graduated from Kazakh National Academy of Art named after T.Zhurgenov (director-choreographer).

In 2014 she graduated from Kazakh National Academy of Art named after T.Zhurgenov (pedagogics of choreography, master of fine art sciences)

- Laureate of III prize at the International Competition of Ballet Artists, Tallinn (Estonia) , 2014

Juliet (“Romeo and Juliet” by S.Prokofiev)

Maria (“The Fountain of Bakhchisarai” by B.Asafyev)

Marie (“The Nutcracker” by P.Tchaikovsky)

Conchita (“Juno and Avos” by A.Rybnikov)

Desdemona (“The Moor’s Pavane” by H.Purcell)

The Queen of the Dryads, Street Dancer (“Don Quixote” by L.Minkus)