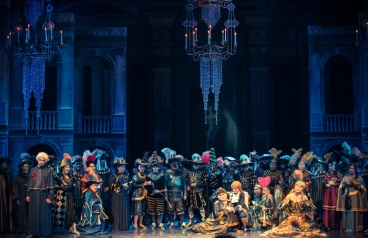 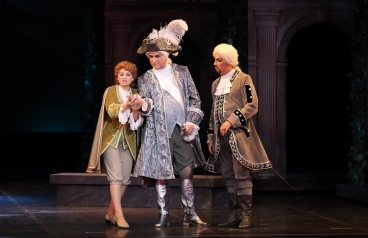 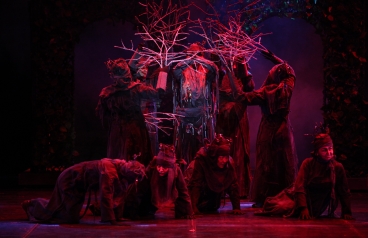 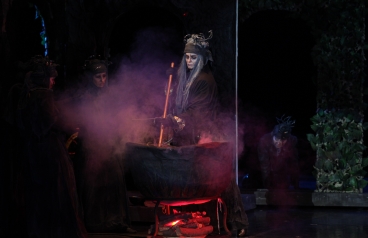 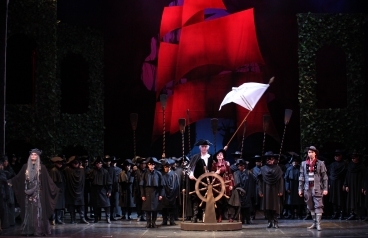 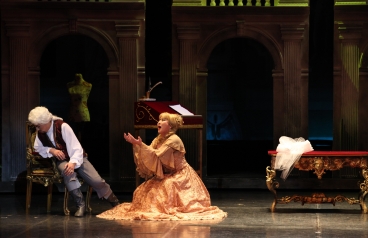 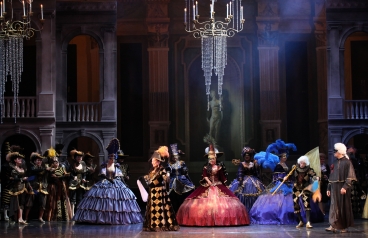 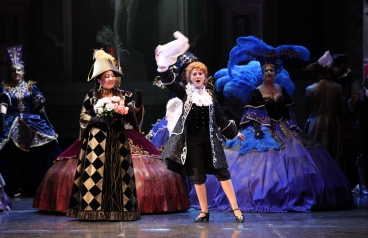 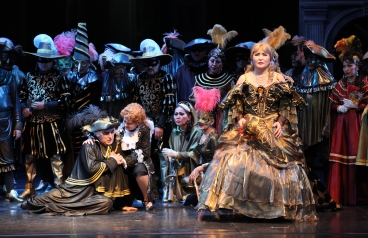 The residence of King Richard. Among those waiting, there are those who wish him peace and quiet, but there are also those who wish to see him die. Tom and Samuel - the leaders of the conspirators - do not agree with the universal praise of the monarch.

The audience begins: page Oscar gives the ruler a list of invitees to the masquerade ball. Richard, looking at the list, sees in him the name of Amelia. He dreams of a beauty with whom he is secretly in love, but cannot show his feelings, because she is the wife of his best friend and secretary, Renato.

The monarch lets go of the courtiers, then takes Renato. He warns his master to beware, as a plot is being prepared against him.

Richard drives gloomy thoughts from himself. He does not know fear.

A judge arrives who has delivered sentences awaiting a final decision. Among others, the judge proposes to remove from the city the soothsayer Ulrika, who harasses the people with her predictions and gathers around herself a bunch of women engaged in magic. This accusation amuses Richard; he offers his retinue a nightly adventure - after changing clothes, go to the fortuneteller Ulrike.

The inhabitants of Ulrika’s home hold a session during which visions come to Ulrika. Richard, dressed as a sailor, hides in the shade and listens from the words of sailor Silvano. The sailor says that he served the king faithfully, participated in many naval battles, and now asks for an answer what the future holds for him.

Ulrika predicts Silvano that today he will be honored with high distinction and rich rewards.

Richard, hearing these words, furtively puts a purse full of gold in Silvano’s bag and a note: “From Richard - to his beloved officer Silvano”.

The king enjoys the joy of Silvano and the surprise of the people. A man enters in whom Richard recognizes Amelia's servant. He asks to accept his mistress. Ulrika immediately exhorts everyone to be alone with a noble visitor. Richard is hiding, wanting to hear their conversation.

Amelia tells the fortuneteller about her heartache: she experiences criminal love and wants to free herself from her. Richard from his hiding place, with a heart trembling with joy, hears that he is loved by Amelia. Ulrika agrees to help the woman in love: Amelia should go to the cemetery at midnight and pick up the magic grass there. The remedy will work only if she takes this terrible path herself and picks grass with her own hands.

Richard's entourage bursts into the dwelling. The king, dressed as a sailor, is the first to ask him to predict fate, but Ulrika turns away from him, not wanting to guess. Finally, after much persuasion, she predicts that he will die a violent death, but not on the battlefield, but will die at the hands of a friend and the killer will be the first to shake his hand.

They are terrified, and Richard refuses to believe the prediction. Laughing, he reaches out to his friends, but everyone turns away, even Tom and Samuel are afraid that the suspicion will fall on them before they are ready to kill.

At this moment, Renato enters, who followed his master, worrying about him. Unaware of Ulrica’s prediction, he calmly shakes his hand extended to him. Richard tells the fortuneteller that her prediction is misleading, because Renato is his most faithful friend.

Again, a crowd led by Ulrika came in, led by Silvano: he excited the people with a story about his luck and now he is looking for his benefactor.

The people honor the ruler.

Cemetery. It is nearly midnight when a trembling Amelia appears to pluck magical grass.

The date is interrupted by the arrival of Amelia's husband, Renato. Amelia's face covers her veil, so her husband does not recognize her. Renato came after his master, wanting to protect him from danger: the conspirators could attack him at any moment.

Richard takes an oath from a friend that he leads the lady to the city gates, but without asking her anything or trying to find out who she is.

The king is hiding, while conspirators appear who discover that instead of the hated monarch, his secretary fell into their hands. They want to mitigate the chagrin of failure by trying to find out who this lady is under the veil.

The secretary is trying to protect the lady, but the conspirators, grabbing a weapon, attack him. Amelia, frightened for the life of her husband, rips off her veil. General amazement, then ironic laughter. A strange story - a husband dating his own wife! At night, in the cemetery?

Renato is standing petrified. The conspirators mock him. Renato is overwhelmed with pain and resentment. Unable to bear such an insult, he invites the conspirators to come to his house the next day.

House of Renato. Amelia in vain assures her husband of her innocence, her husband does not believe her and is ready to kill her, finally, heeding Amelia's prayers, allows her to look at her son for the last time. Left alone, he decides that it is better to kill Richard.

It is getting light.

Tom and Samuel come in. Renato announces readiness to join the conspiracy, but demands that he be given his own hand to end the king. The conspirators do not agree, so they decide to rely on fate and cast lots.

Renato forces his wife to draw lots, on which is written the name of the future killer. Amelia, although she does not know what they are condemning her to, she still feels that she involuntarily gives way to some tragic event.

The lot will fall on Renato. Page Oscar enters and holds out invitations to the masquerade ball. The conspirators decide to carry out their plan at the ball. Their password is “Death!”

The festival begins: crowds of masks fill the hall. Renato pokes out at Oscar like a king is dressed.

Amelia also recognizes among the masks of her beloved. She begs him to leave the ball, but Richard again confesses love to Amelia and says that they should leave forever.

At this moment, Renato kills the king and tries to hide. The courtiers detain the killer and rip off his mask.

Richard forgives the killer and forbids revenge for his death. His last words call everyone to peace and harmony.

The opera "Un Ballo In Maschera", once by the famous Italian writer Gabriele d'Annunzio, was given a magnificent definition: "the most melodramatic of melodramas." In part, this definition was addressed to the work of the librettist - Antonio Somme, who surpassed all Verdi's previous librettists in boldness and vivid language. Sensuality, brilliance and humiliation, human frivolity and tragic stress - all this creates a real “physically tangible picture”.

In many ways, the opera is bright thanks to the excellent distribution of roles.

All threads lead to Earl Richard: after all, while he is alive, others act, even to overwhelm him; when death overtakes him, everyone, both friends and enemies, is numb with grief. The count captivates the beautiful Amelia, favors a conspiracy, defies death on the field of executions. He puts a knife in the hand of his best friend and appoints a fateful ball, in which he takes part with an unshakable faith in himself. Richard is guilty and doomed. The cynicism of Don Giovanni could save him, but his essence is too pure.

The opera “Masquerade Ball” by Giuseppe Verdi marked a new round in the composer's work, becoming an indisputable masterpiece of the opera genre.